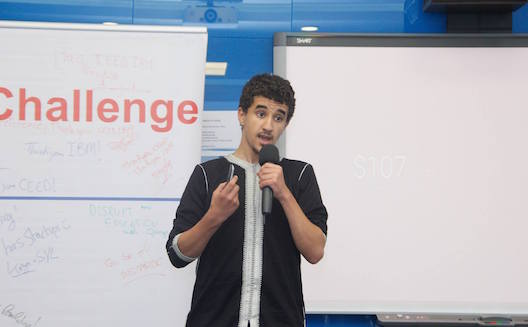 Mohamed Aalabou is a surprising person.

Last September, when he took the stage at CEED Conference in Casablanca, he had the energy and ease of an American TED speaker; he was so funny that everyone turned off their phones; and his service made so much sense that it won the pitching competition.

What amazed everyone most though was that he was only 17.

Almost a year later his P2P knowledge-sharing platform, Jusk, is facing some issues but he hasn’t lost his enthusiam.

Last June, Aalabou launched Jusk in beta mode. Moroccan students could ask questions and the algorithm would find the right person to answer it; both members would be connected for a VoIP phone call (voice-over-internet protocol).

Members would be rated to insure they actually added something to the discussion, and Aalabou had his monetization model figured out: users would later pay a subscription of $0.10 a day, $65 a year.

But then, just as the team was ready to roll out the official version, Morocco banned VoIP without a warning. The service couldn’t function anymore, but that was the start of problems.

“With this ban, the team got discouraged, plus my CTO left to Sweden to get a job there. So what’s the plan?” he said. “I don’t really know. We’re going to wait a month or two to see what the situation will be here in Morocco.”

If nothing changes, he’s going to have to move elsewhere – somewhere else in Africa, or to the US or UK - to launch his community-driven company.

So how does he keep his morale up when everybody else has given up? Here’s what’s driving him.

1. Don’t wait for life to happen

Aalabou started coding at the age of 10. At 15 he was selected to join a high school in Swaziland through the United World Colleges, a global program that sends students in top-tier international high schools to inspire them to create a more peaceful and sustainable future.

You might say he was already achieving a lot, but he didn’t think so.

“It might sound weird but up until the age of 15, I never really felt a human, I just felt like a robot, a machine set on a track to achieve something, and that track was designed by somebody else. The day I met the people at [the school in Swaziland], it opened my eyes into a new reality, it made me realize I needed to start living my life and not just go after diplomas,” he said.

He says to start fixing the “real issues” in the world young people like him have to start making their own decisions and acting.

2. Find your own way

Once Aalabou had his high-school diploma, he dropped out “to actually go out and learn”, but he doesn’t think this is the right path for everybody.

“I really don’t [believe everyone should do the same]. People just need to make sure they’re the ones controlling their lives and that nobody is deciding for them,” he said

If you want stability, get a diploma. If you want to be a doctor, graduate. If you don’t think you need a diploma, don’t go to university, he believes.

3. When you need something, learn how to do it

When Aalabou was about 14, he realized he was building cool apps that only his family was using. He wanted a bigger audience.

“So one day, I watched two videos of Steve Jobs and 10 videos of Gary Vaynerchuk, and I decided to learn marketing,” he said.

He downloaded books, executed what he learned, and ended up being a marketing consultant to SMEs.

Knowledge is the basis on which you build a business, he says, and recommended to focus on gaining insights first.

4. Build a business not a startup

Aalabou is building a business in the sharing economy at a time when not only the trend is against him but many startups in that sector are failing.

But he doesn’t care: it’s not about trends, but long-term vision.

“I’m building a business more than a startup. I’m not following a trend, I want to build a business that provides people with a value that’s clear to them.  I’m trying to do it old school, I’m very conservative in my decisions,” he said, even though he’s anything but old.

5. Get your family on your side

While many entrepreneurs in the region may suffer from families disagreeing with their work and lifestyle choices, Aalabou’s parents have always supported him - even when he dropped out of university.

But that wasn’t familial luck: he spent time engaging them in his ventures.

“They know what I’m trying to achieve and they see how the decisions that I make contribute to me reaching my goals. They’ve always added their own input to my decisions but they never went against me,” he told Wamda.

Convincing them he was on the right track involved showing them results.

“I’m financially independent and they know whatever I’m doing right now won’t be critical for my life. They know I’m going to survive even though I dropped out of school.”

“I don’t want you to take it [the] wrong [way] but I don’t really care about anyone else,” Aalabou said.

“Seeing people succeed or fail doesn’t really affect me much. I’m happy to see the startup community is growing but I don’t give it that much thought. I think about myself more than anybody else.”

7. Look for the pressure

Following his CEED win, Aalabou has been featured several time in Moroccan media and as a result a few people began to follow his company’s work. He couldn’t be happier, but not for the reason you might think.

“Everybody needs pressure to actually get up and do something. It’s like having a teacher watching you after school.”