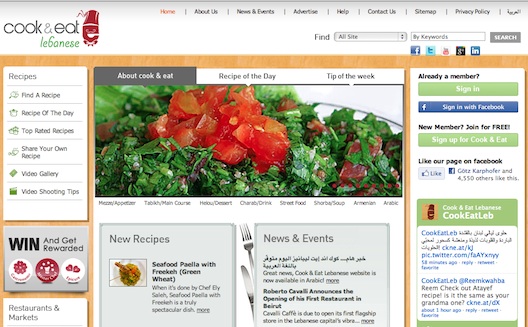 To cater to cooks during Ramadan, two Arabic recipe sites have recently taken steps to make content their content more local and mobile.

For online cooking community Cook and Eat Lebanese, which launched in November 2011, the key is ensuring consistency in both English and Arabic for its 5,000 users. Today, they've announced a partnership with Qordoba Translation to translate over 500 recipes- 85,000 words in total- into Arabic from English and vice versa. Moving forward, content uploaded in any language will appear in the other, in near real-time, thanks to Qordoba Translation's network of translators and editors in 30 countries.

"Qordoba will provide localization in the required language, to maintain the quality that we offer our client base," said Lebanese founder and CEO Hussam Kayyal.

Qordoba Translation pushed to prepare the site for Ramadan, finishing the translation in 20 working days over an 8-week period. “A team of 10 translators, editors and senior editors worked together to pull off the tight timeline that the Cook & Eat team requested for the Ramadan launch,” said Elan Habib, operations manager at Qordoba.

The site, which aims to create a community beyond cooking, is also launching a new "Recipe for a Cause" drive, which will give users a chance to submit recipes not just for points and rewards but also for a chance to donate to their favorite charities. If they submit a recipe without a video, they receive $5 in credit, and $10 with a video, or $20 in credit for a recipe from a chef, and $40 for a recipe from a chef with a video, $40. While the site hasn't generated a consistent revenue stream yet, it will be monetizing through advtertizing and is finalizing sponsors for its charity drive, says Kayyal.

Another cooking portal, Shahiya, has also reached out to users by launching an iPhone application, which is now #1 among free apps in the Lifestyle section in the Saudi, Emirati, and Kuwaiti iTunes stores, and in the top ten overall in the iTunes stores in Egypt, Jordan, Kuwait, Lebanon, UAE and Qatar.

After launching Cook Lebanese this past year to sell to the Saudi market, Shahiya, which boasts 50,000 unique users a day, is further catering to its readers' needs with iPhone app mobile. "Cook Lebanese is a stand-alone application that  works like a cookbook; all of the 100 recipes were tested by our team. But we thought the whole Shahiya site should go mobile. Around 30% of our traffic comes from mobile, mostly from iPhone, so we wanted to offer a nice experience for our users."  said Hala Labaki, co-founder of Shahiya.

The Shahiya app is in Arabic and lists all of the content on the website. An Android application is on its way, but with a concentration on the Saudi market, Shahiya isn't in a rush to translate the content into English. Labaki mentioned "We are concentrating on our Arabic content at the moment."

Between the two apps, anyone looking to prepare a new iftar won't be short of recommended options.