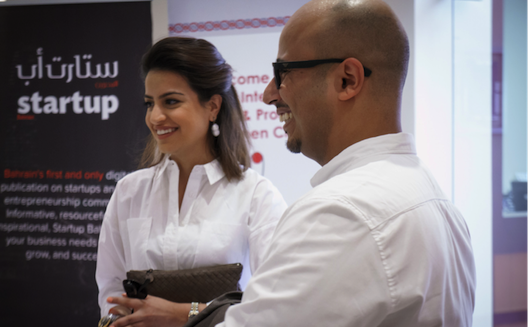 Early on a Saturday morning at the Business and Professional Women’s Club in Bahrain’s AlJasra district, I attended the first monthly Startup Morning, hosted by digital publication Startup Bahrain, with the support of Tamkeen, a semi-government organization tasked with aiding private sector enterprise and human capital development.

Drawing inspiration from Tamkeen's Chairman and Acting Chief Executive, H.E. Shaikh Mohammed bin Essa Al Khalifa — who was the guest of honor for the inaugural event — Startup Bahrain is on a mission to drive a startup movement and grow a community on an island with a rich heritage of trade and commerce.

There were many familiar faces at the casual gathering of around 40 entrepreneurs, including creative force Wafa Obaidat, and Hasan Haidar, CEO of Bahrain’s first business angels company, Tenmou.

He also mentioned that according to a recent public opinion poll, 93% of those surveyed have heard of Tamkeen — which was established in 2006 — and either know a beneficiary, or have been one themselves.

However, the recent temporary suspension of Tamkeen’s programs due to irregularities affected hundreds of startups. The large scale of the impact raises the question: how dependent is Bahrain’s private sector on public sector support?

What should Tamkeen be asking prospective program beneficiaries?

In my opinion, Tamkeen should be asking their beneficiaries about growth strategies and aspirations for high impact entrepreneurship that will attract foreign direct investment and international resources into the country, versus subsidizing businesses that drain government resources.

After all, it would be self-defeating to establish a private sector that is fully dependent on government support for survival and competitiveness in the long-term.

And while I am not suggesting that governments should regulate the business sectors, I do think that certain sectors — such as high-tech and those that contribute to overall development like health, education, and of course green industries — deserve greater incentives than F&B outlets and franchises that are mostly patronized by Bahrain residents, and are contributing to the growing problem of diabetes and obesity. The same goes for high-polluting industries that will negatively affect both air quality and public health. Especially since an unhealthy population means lower national productivity, and will incur a heavier economic burden on public expenditure in the future.

“What Do You Need to Grow? How Can We Help You?”

Sh. Mohammed opened the door for discussion by posing this question; here are some of the responses from Bahrain’s entrepreneurs:

1. We need a venture capital eco-system — for both Bahrain and the region.

2. Banish the bureaucracy: entrepreneurship policy at the top doesn’t filter down to the guy behind the counter dealing with Tamkeen beneficiaries. Why not automate the process?

3. If Bahrainis are to truly become employees of choice, focus human capital development on work ethic, in addition to skills and competencies, said one entrepreneur whose business suffered from her Bahraini employees’ lack of commitment.

4. Growth can be measured in different ways: one should remain cost-efficient and competitive while expanding and growing in other markets. This doesn’t always correlate with expanding office space or increasing the number of employees.

5. We need more entrepreneurship mentors overall, and especially for creative industries whose entrepreneurs may lack business savvy. For example, a furniture designer asked: “What do I do when someone wants to open a franchise of my company in Qatar?”

6. Support SMEs through helping them secure business opportunities by giving them a 10% advantage in public tenders.

7. Create sanctuaries free from bureaucracy aka “free zones”. This was one idea that Sh. Mohammed was opposed to, for the reason that this only skirts around the problem as opposed to addressing it head on.

The key challenge for policy-makers remains: how to measure, maximize, and scale impact in an economically, socially, and environmentally sustainable manner.