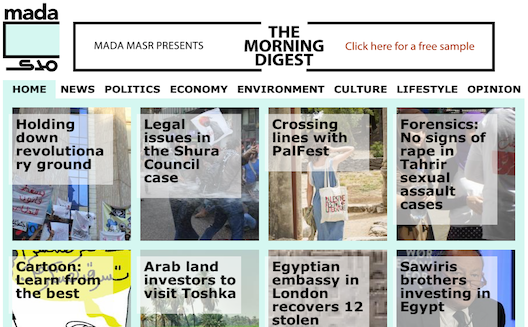 Since Egypt’s 2011 revolution unleashed exponential growth in social media engagement and internet penetration rates, an increasing number of entrepreneurs have taken on the challenge of launching and fostering media ventures in Egypt.

Yet spearheading a media venture in Egypt remains a Quixotic feat for entrepreneurs: regional investors are skittish about media and are only now beginning to pay attention to this emerging frontier.

“Regional media giants are now considering investing in content startups, which was not happening three to four years ago,” says Fady Ramzy, a country manager for Interact Egypt, a digital content distributor working with telecoms and other companies.

A range of new digital media startups and incubators is tapping this growing interest in online content, emerging social media channels, and online advertising, as well as innovative ways of consuming and delivering new, niche content.

“The raw talent is here; since 2011 Egypt is becoming fertile soil for expressing things differently,” said Moustafa Zakaria, founder and managing director of Garaad, of his decision to base the incubator in Cairo. “People are exploring new ways of expressing themselves.”

Most media startups in Egypt and in the region are still at the stage of experimentation as traditional media, corporate sponsors, and advertising are still grappling with digital innovation, new channels, and a growing audience.

“The rules are being written as we speak,” said Zakaria, noting monetization models, distribution, and technology itself has changed. “This is a great opportunity for us to set the rules before they [corporates] do.”

Despite the tough political climate and lack of investor interest in Egypt, a slew of new media companies have been able to attract funding for new ventures.

There are also more traditional news portals like Egyptian Streets and Mada Masr, delivering English-language, independent online news, both of which launched in 2013.

Since its launch Mada Masr supported itself through grants from Egyptian and international organizations that support independent media. Now they are moving away from the grant model and developed a business plan to remain sustainable and have multiple income streams.

Mada Masr reached 300,000 monthly page views in its first year, but finding a sustainable business model remains elusive for its editorial team. Its journalists have seen several online and print publications close down in recent years.

As is the case with the rest of the world, regional investors are wary of investing in content alone and see more potential in social media engagement and advertising.

“Social media started after the revolution; this was the beginning of the demand for social marketing,” said Ahmed Hassan, production manager at 5D, a Cairo-based digital media services company launched in December 2012. “Businesses started paying more attention to social media channels; they started to ask for these services.”

As the environment in Egypt itself remains challenging, others still prefer to hedge their bets and take media startups to established regional hubs.

In May 2014, the Cairo-based Flat6Labs accelerator owned by Sawari Ventures launched a new incubator in Abu Dhabi specializing in digital media with twofour54, a part of the tax-free Media Zone Authority in Abu Dhabi.

The new accelerator will foster companies developing online content, e-commerce, video production, and mobile applications. It aims to launch over 80 companies over the next four years, according to the website.

“Twofour54 and Flat6Labs share the goal of developing talent in the UAE and across the entire Middle East,” said Noura Al Kaabi, the chief executive officer of twofour54, in a statement. “We look forward to giving more young talent the opportunity to grow and thrive with the support of Flat6Labs.”

While there is no shortage of ideas, the biggest challenge all entrepreneurs face is even more acute for the media sector: raising funds.

“Investors [in the region] are relatively conservative,” said Abdelrahman Wahba, founder of Iqraali, a Cairo-based audio news platform that narrates news content via a mobile application. “They are interested in something that will generate revenue from day one. Media does not follow this path, you have to build traffic first.”

Iqraali are among the lucky ones; since launching in January 2013, the startup has raised two rounds of funding.

“There is lots of energy and ideas to produce content, the talent is there,” said Ramzy, echoing Zakaria’s sentiments. “What is lacking… is [the knowledge of] how to build a business and monetize [these ideas].”