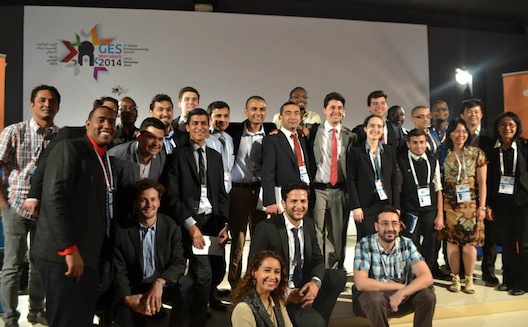 This year’s Global Innovation through Science and Technology (GIST) Tech-I competition in Marrakech was a major win for Africa. Among the top six prizes, in both the Startup and the Idea stages, five came from Africa. The top prize in the startup category went to David Gluckman from South Africa, founder of Lumkani, a low-cost and connected heat detector for shacks in urban informal settlements that could reduce the risks of the often devastating slum fires in South Africa and other developing countries.

In the idea stage category, the top prize went to Malawi’s Mixon Faluweki, whose Padoko Charger uses a bicycle dynamo to charge cellphones while the user is cycling between locations. The second prize went to Cynthia Ndubuisi from Nigeria, who came up with the idea for Kadosh Production Company (KPC), an agriculture business that would use cassava as livestock feed. The third prize went to Alim Hamitov from Kazakhstan of Robigroup project “Dozor”; a low-cost security system that uses GSM door phones to alert owner’s phone in case of home burglary.

The winners received up to $15,000 in grant funding. All 30 finalists will also have access to three months of one-on-one mentoring from global experts in their field.

I had the privilege to be one of the 20 subject matter experts who served as mentors and judges for the Tech-I competition last week in Morocco, sponsored by the US State Department and implemented by the American Association for the Advancement of Science (AAAS). The thirty finalists from 24 countries received intensive entrepreneurial and business training by the expert mentors prior to pitching their innovative ideas and businesses at the 2014 Global Entrepreneurship Summit (GES). They were chosen from a group of 67 semifinalists through a combination of online public voting (around 405,000 people voted), and expert panels in the fields of agriculture, energy, health, and ICT. The finalists were divided into two categories: 15 who were at the idea stage of their business and 15 others who were at the startup stage.

This year’s Tech-I competition started with a record 2000 application from over 70 countries. Although seven out of the thirty finalist entrepreneurs came from five MENA countries (Morocco, Tunisia, Algeria, Jordan, and Saudi Arabia), only one received an award:

Allervoid is a healthcare mobile application that provides consumers, especially those with chemical allergies, with relevant information regarding chemical ingredients of products simply by scanning the product UPC. The product info is matched with a database of about 120,000 products available in the market. The data retrieved allows individuals to avoid potential harm and allergic reactions due to ingredients that may exist in products. The app is targeting to capture a percentage of the multi billion-dollar cosmetic, beauty and personal care product global market. Wassim is hoping to launch the app in the US market after overcoming associated regulatory hurdles. (A similar product, Asly, launched in Egypt in 2012.)

Two other contestants from the MENA were Sheaply and JUST.

Sheaply is a new addition to the sharing economy. In addition to sharing your apartment (Airbnb), car (RelayRides), office space (PeerSpace), bike, and even your wifi connection, now with Sheaply, you can share available space in your luggage. Hicham Zarrouky and his cofounder from Morocco are trying to achieve a P2P shipping platform where travelers can make money by delivering packages to thrifty receivers at their destinations. Sheaply connects travelers with people who want to ship items for cheaper than available market prices or have goods bought and delivered for them, especially in countries where it is hard to buy online. “Sharing is the new buying,” said Hicham during his pitch. Sheaply will be launching its beta version with focus on Morocco-France as a pilot pathway. Nevertheless, Hicham and his cofounder are still struggling to overcome the security and legal concerns with shipping third party items; a hurdle that didn’t stop competitor app Friendshippr from securing investments last year. Yet again, five years ago who thought that you would gladly rent your apartment or car to a complete stranger?

JUST is promising to bring transparency to the fashion industry’s complex supply chains. Tragedies such as last’s year collapse of the Rana Plaza building in Bangladesh, where more than 1,100 people died, are a fresh reminder of the need to uphold ethical conditions in the garment industry. Shahd AlShehail from Saudi Arabia and her cofounder are trying to connect designers and consumers to ethical suppliers, using technology and data to tell the stories behind our clothing and create positive impact in the fashion industry. Shahd, during her pitch, explained that the main goal of JUST is “to bring transparency to both consumers and fashion brands, both of whom should know if their garment was produced by ethical suppliers, free of child labor and ill-work conditions.” The ultimate goal is reaching a membership capacity that allows JUST to provide a credibility stamp that differentiates morally committed from agnostic brands and their suppliers. Shahd has already secured the membership of a number of medium-sized brands and is hoping to grow the business so as to launch fully within six to eight months (more about JUST here).

As rewarding and enriching as my experience was working with inspiring entrepreneurs from all over the world last week, I would have liked to see more MENA startups and ideas with a focus on social impact. Aside from the financial rewards, I encourage the growing number of MENA entrepreneurs to consider applying for next year’s GIST Tech-I competition to benefit from the quality mentorship and exposure. I hope by next year MENA entrepreneurs can collect top prizes at the GIST Tech-I Competition; the more applicants the merrier. Let the global competition begin now!