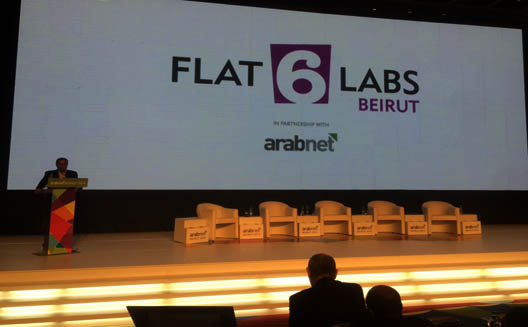 Regional accelerator Flat6Labs will open a chapter in Beirut, cofounder Hany El-Sonbaty announced today at the Arabnet conference. The Beirut accelerator will be Flat6Labs’ fourth in the region, supplementing existing programs in Cairo, Jeddah, and Abu Dhabi.

"Our offering in Beirut will be consistent with our offerings across the region: seed stage financing, business training, access to top quality mentors, and a whole host of perks and administrative support," said the cofounder in his address. CEO Ramez Mohamed told Wamda that the Beirut accelerator will, like Flat6Labs Cairo, be "innovation driven, and focused on the knowledge economy and tech enabled business. We plan to invest in hardware, electronics, healthcare, education, renewable energy, etc." Mohamed says.

The goals of the accelerator will be to "produce the largest quality stream of SAL companies over the next five years." More specifically, the accelerator will plan to launch 100 companies, raise $40M in follow on funding, create more than 1000 jobs, and "most importantly, get a 25% IRR financial return for our investors," El-Sonbaty said.

"There is a misconception in the region about accelerators and incubators," Mohamed told Wamda. "It's very important that we present this new accelerator to the community as not just a not-for-profit thing; we are putting money into these startups and we hope to get them from one stage to another, and from one investment round to another."

Flat6Labs will launch its Beirut accelerator in conjunction with Arabnet, El-Sonbaty said in the announcement.

The first Flat6Labs accelerator opened for business in Cairo in 2011, founded with the support Sawari Ventures and the American University of Cairo. Building on its success in Cairo, the team expanded to Jeddah in 2013, and then Abu Dhabi last year, the latter with a special focus on media startups.

Since its inception, Flat6Labs has accelerated more than 75 companies in Egypt, Saudi Arabia, and the UAE (including companies participating in cycles currently in progress), with more than 160 entrepreneurs attending its program, El-Sonbaty said in his statement. These companies have created more than 400 jobs in Egypt and Saudi, Abu Dhabi Managing Director Nina Curley told me a few months ago, and more than half have secured follow-on funding from over 40 investors across the globe.

Successful companies that have been accelerated in Cairo include Integreight, a hardware company specializing in Arduino shields, which raised over $85,000 on Kickstarter, Nafham, a free educational video platform linked to Egypt's public curriculum with two million page views per month, and InstaBug, an app that allows users to shake their device to report bugs with any other app.

"Our core philosophy is to invest in entrepreneurs in the Middle East," El-Sonbaty said. "Our model has proven to increase the interconnectedness of the ecosystem." We look forward to seeing the relationships Flat6Labs inspires in Beirut.

This is a developing story. Stay tuned for updates.