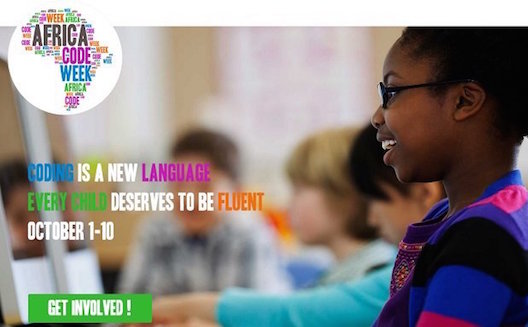 Almost everybody has heard of Code.org, the American non-profit that aims to get kids to code.

They’re hard to miss. In 2013, the organization got Will.I.Am, Ashton Kutcher, Shakira, Sheryl Sandberg, Bill Gates and many more to promote the Hour of Code, an initiative that teaches students the basics of computer programming in just 60 minutes (with an inspiring video).

Their ambition is to change the view that coding is only for tech-savvy kids, and to show that anyone, girl or boy, can have fun learning to code.

Behind this program is a simple belief: coding teaches one how to think, and is an invaluable skill that not enough people in the workforce master. So it was only a matter of time until a similar initiative popped up on the continent that has the highest number of youth in the world: Africa.

Some 11 million youth are expected to enter the African labor market every year over the next decade. Digital jobs could increase their income by 40 percent to 200 percent, according to Africa Code Week.

The organization has ambitious goals. It aims to introduce coding to 20,000 kids in 17 African countries from October 1 to 10.

In Egypt, 240 trainers will teach 2,500 kids, mostly in Cairo and Alexandria. In Tunisia, the organizing team wants to teach 200 kids in cities like Sidi Bouzid, Kasserine, Tozeur, Beja, Mzawgha, and Tataouine where kids have little chances to learn programing.

“Several studies have estimated that it takes around three years on average for Egyptian youth to find a full-time job after graduating from university and jobs are even harder to find for youth with lower levels of education,” said Claire Gillissen-Duval, SAP’s director of Corporate Social Responsibility (CSR) and co-organizer of Africa Code Week in Egypt.

“Most companies present on the continent today are struggling to fill IT related positions with local, qualified workforce,” she continued.

“When you know how to code, you can find job without needing a diploma” said Fleur-Eve Le Foll, founder of Casablanca’s coding school Cod Cod Codet and ambassador of Africa Code Week in Morocco with Atos. “Even if they don’t become programers, they will learn creative and system thinking as well as collaborative work; and that’s important for all kids.”

Learning code is not just a means to a better living, it is also a required skill for anyone who’d like to be a part of Africa’s future and become key actors in the continent’s economic development.

Volunteers, mostly CS teachers, students and teaching-assistants will get access to teaching material and in some cases to in-person trainings.

“The resources and training techniques offered by Africa Code Week are a great asset,”said Dorsaf Benna, founder of the non-profit ITA (Informatics Tunisian Association), which runs code training centers in each Tunisian governorate and who’s behind this program in Tunisia.

In Egypt, 240 university students have already been trained by experts coming from Europe.

Coders in Morocco can apply here to attend the training in Casablanca from September 14 to 16.