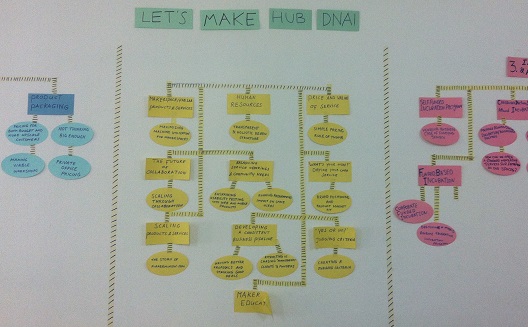 Hub 'DNA' - working out what's essential and what's not. (Image via Eduard Cousin)

Asking Adam Molyneux-Berry about Hub in a Box is like pressing play on a jukebox.

Hub in a Box is his newest project, after cofounding Ice Hubs Global, Ice Cairo and social enterprise Nawaya, and his enthusiasm is catching.

The project - a plan designed in Africa and being put to use in Europe and the US - was born out of the need for innovation spaces to pay for themselves.

“Most innovation spaces are either not financially self-supporting, or they [are run by] exhausted teams that literally are doing acrobatics to keep everything up and running. But some other hubs are very sustainable,” said Molyneux-Berry.

The first Hub in a Box workshop was held in Cairo in December 2015, attended by 18 representatives from global hubs such as Beta House from Berlin, Nahdet el Mahrousa from Cairo, Impact Hub Caracas, iHub in Kenya and others from Europe, South America and Africa.

The idea came from the Global Innovation Gathering, a yearly summit for three hub networks where financial sustainability was a constant refrain but never led to a solid action plan.

Molyneux-Berry wanted to put words into action and the result was Hub in a Box: a three-and-half-day “super high impact” workshop to create, not a step-by-step plan, but a collection of information different innovation hubs can use. 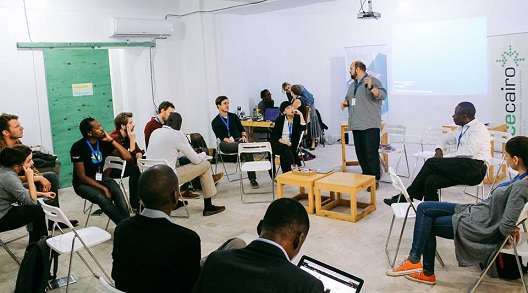 The workshop followed three tracks: community and space management, products and services, and incubation and acceleration.

The most important element of the workshop was the open-source Wiki, created during the event, which will provide a blueprint for hubs around the world.

The blueprint for prosperity

Ice Cairo and Ice Alex have already improved their services following the workshop, and several other hubs across the globe were planning to implement ideas that came out of it.

One new idea was a checklist for hubs when choosing programmes to partner up with, and the Wiki details issues such as validating revenue streams, bootstrapping, cross-subsidizing and how to effectively build a community. 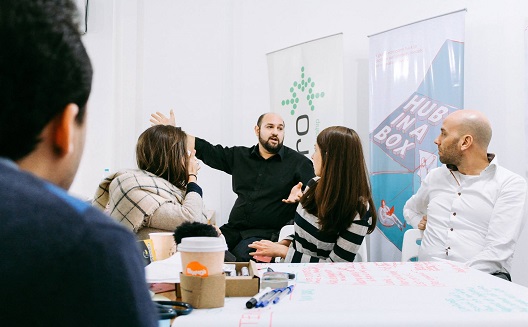 Hivos MidEast Creatives programme manager Arthur Steiner said the results of Hub in a Box were satisfying, but he would be happy to see more activities and content in Arabic, to have a greater outreach to the local community.

He said Hivos, a Dutch development cooperation organization, was in talks with Hub in a Box to fund the second round, and had organised a session for Egyptian hubs outside Cairo, in Arabic.

That leaves the question about how much impact Hub in a Box will have. Are hubs moving towards self-funding after the first workshop?

“That’s too early to judge, in five months since the first workshop you cannot see this yet,” Molyneux-Berry said.

Molyneux-Berry envisions Hub in a Box workshops all over the world and a Wiki out of control with data, but today he has two things on his wish-list: making the Wiki more sophisticated and developing a business model for Hub in a Box itself.

Hub in a Box aims to become self-supporting, although, how this will be achieved is not entirely clear yet. The Wiki is completely open source and participants are also contributors, ruling out several potential revenue options, and the first workshop cost $6000.

Molyneux-Berry said entrepreneurs needed to start supporting their own ecosystem as governments had no incentive do so.

“We have massive communities that people need. Ice Cairo is like 40,000 people. We can create high impact much cheaper than anyone else.”

The next Hub in a Box workshop will be held during the Republica gathering in May 2016, and the organizers want to hold another during this year’s Rise Up Summit in Cairo.