Gaps in the market, children desperate to learn, it’s the perfect combination. And one that a young Persian entrepreneur is tapping into.

After displaying a love for teaching during his college days Amir Yazdanpanah acquired the nickname "teacher".

After drifting for several years between the US and UK he finally settled in Dubai to launch his education startup Makersbuilders in May 2015. And the nickname came into use once again.

Makersbuilders is, in the words of Yazdanpanah, a startup focused on providing children aged 7 to 18 years old with skills in tech. "We want to tap into everything in the digital world, from programming to electronics to digital art," he said, "basically, everything children might need while inventing."

Yazdanpanah wants to unleash the creativity of children, something he says is not possible without the support of parents. "We started preparing for several events to explain to parents that Raspberry Pi is actually not a candy," he said, "as well as other events about cyber security and children-related social media networks."

Now they have big players like General Electric, Intel and Microsoft showing a readiness to participate with them starting next November, Yazdanpanah told Wamda.

The beginning of builders' journey

After working in tech for several years, Yazdanpanah moved to Dubai with the idea of starting a company there. "I was active with Turn8 while mentoring several startups, and I discovered a huge gap for skills in the tech market," he said.

Yazdanpanah started by teaching his own son game programming, to be later joined by his eager school friends and, soon enough, several consecutive sessions sparked the launching of Makersbuilders.

Turn8 manager Kamal Hassan believes that the accelerator has succeeded in nurturing an entrepreneurial and innovative ecosystem in the region, and that Maker Builders echoes that change by teaching tech to a new generation of entrepreneurs in the region.

"Previously, we didn’t invest in such companies as Maker Builders, but we believe in the company's vision and team. We believe their vision is in line with that of the UAE leadership of making various efforts to build tech skills and qualifications in youth."

The five-member team gives after-school classes, as well as open weekly classes at The Cribb center every Saturday. "We have children from 25 different schools attending our classes," said Yazdanpanah. “We also give several after-schools in schools like The American School of Dubai and GEMS Wellington International School and the Jumeira Baccalaureate School."

Despite other courses being available online the founder said that when it came to children it was better for them to work side by side. "Also, schools are so occupied with their own curriculums that they can't meet their students' tech and digital needs."

They are also offering bootcamps and workshops. Its latest initiative, Tech Connect Program, aims to train more than 200 children interested in collaborating with startups for experience in market research, programming for marketing and others. "We are the link between children and startups, with the approval of parents," he explained. "So that they can have projects to do while on holiday."

Collaborations with other companies include the Youth Center (ناشئة الشارقة) which enables children to develop their skills and turn their ideas into a reality, thanks to a joint program called: "designing and developing smartphone apps".

Makers and programmers: a passing trend? 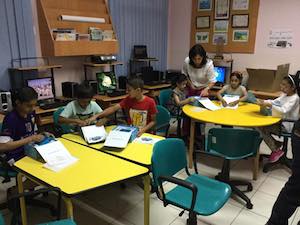 For Yazdanpanah the important thing is to expose children to different technologies but without going too heavy on the details, at least to start with.

“Writing code for Java, as an example, is too complicated and might deter their enthusiasm. This is why younger pupils start with visual programs like Lego and game invention, we want to teach them how to solve problems at first,” he told Wamda.

He also thinks the hype that can come with programming is a bit of a double-edged sword, especially when the parents become confused about it.

But with demand for such courses on the rise the competition is good.

Other companies supporting the interests of makers include Origin Base, which teaches artisanship like jewelry-making and woodworking, The Assembly for digital manufacturing and other institutes like Coding Circle and Fun Robotics.

However, Yazdanpanah is sure that his company differs from others "because it wants to explore and try new things that are not just limited to programming in a fun way, without tests or evaluations for children."

The region also lacks funding said Yazdanpanah. Comparing it to the US, where he lived for several years, he told Wamda that “here, you implement a two-year awareness campaign because you don’t have the resources, and you must think of finances and profit."

Moving forward they plan to attract more schools and build a makerspace for an expanding client base. Plus, build licensing models for their concept in order to expand to other countries.

As for marketing, the team has stuck to word-of-mouth.

"We spoke to one of the GEMS school and, soon enough, other branches started contacting us. And one of the students loved our classes and told his school about us, and they invited us to work with them. Also, we shouldn't forget the parents, who are the best marketers."

So, sticking to the founder’s belief that "do something right and, and people will find you", has worked.