When Prashant Gulati (also known as PK) was 10 he asked his father for a carpenter’s kit.

In those days child-friendly kits wouldn’t have been available, so he demanded a grown-up one. “You couldn’t just buy these things at a store,” PK tells Wamda. “So my father bought one off a local carpenter.”

He immediately immersed himself into making things, and then moving onto household electronics, like making doorbells.

It was this love for making things and using one’s hands that has eventually led the entrepreneur to establish The Assembly, a makerspace in Dubai. 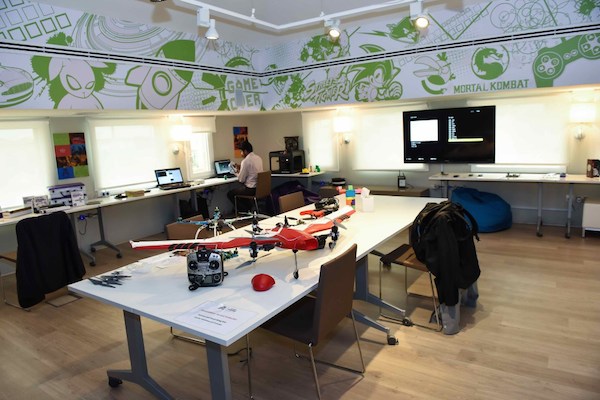 A new addition to the maker scene of the UAE. (Images via The Assembly)

While coworking spaces in the Middle East have found solidarity in numbers, and a couple of years ago saw a surge, the maker scene is still a growing one.

Ideal for startups as they provide a place to work plus WiFi, telecoms, meeting rooms, and likely food, the coworking space has proved very popular. But a space for actually making things is increasingly in demand.

Recent additions to the maker scene include Beirut’s Fab Lab, and Abu Dhabi’s TechShop due to open in October. In the past, Iraq has seen Fikra Space do well, and they are now seeing the advent of the new Science Camp in Basra.

Currently hosted at the In5 Innovation Center The Assembly is looking to become a meeting point for all those looking to make a change to the tech hardware output of the region.

"Even if you have an idea for a wearable device, you don't know where to begin and you don't have anyone to guide you," he says. 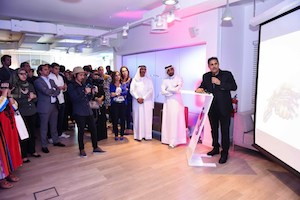 PK during the launch of The Assembly at in5.

As such, part of PK’s mission is to inject back into society this idea of actually doing things with one’s hands. “People live and die without hammering a nail into a wall [...] We don’t have the concept of working in our own hands.”

In order to meet the growing demand for tech devices, PK doesn’t see why people in MENA can’t be responsible for building up this hardware culture and meeting this need themselves.

“The Internet of Things has created a local opportunity, people can build a solution local to them, locally. We want to build the kind of capacity that has being going to make things, rather than just thinking about it.”

“We see innovation as invention driven,” says PK. “The genesis of big data in pharmaceuticals and life sciences. You take that analogy and people are using skills from elsewhere and creating something that changes lives.”

Citing as an example Nest, the thermostat, smoke alarm and camera all rolled into one, PK sees The Assembly as a space where people will be able to adapt age-old inventions for a modern market. “The thermostat has been around for about 50 years, but you bring in exceptional packaging and additional features, and you get Nest.”

With a region full of designers, programmers, and engineers not coming together to create, PK says the time is ripe for them to do so. “It's a process that involves everybody and requires a collaborative effort.”

The role of The Assembly

Initially The Assembly is poised to provide three channels of communication between those in various industries. 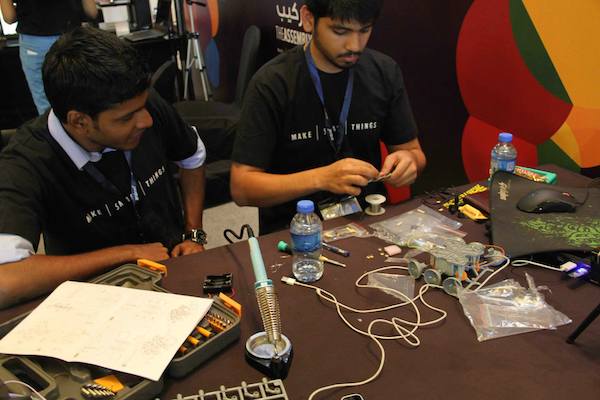 Hands on with hardware.
Funding for the space is, to date, largely coming from PK’s own company Optimistix.

For the time being, in order to remove the friction of wanting to learn and actual learning, often created by fees, PK wants all workshops remain free of charge, open to all.  "We organized a few workshops and were surprised with the number of interested participants, ages ranged from 19 to 54."

Partnerships with Qualcomm and Dubai Internet City have also enabled them to provide users with a network - something that PK is working on expanding now.

The time is now

“We can’t but trust that maybe the region does hold a lot of talent and potential,” says PK. As far as he is concerned the time has come for the MENA region to make the shift to the field of tech makers.

However, battling with the preconceived notions that tech is something that requires a lot of time to learn, and that hardware isn’t for everybody, is very real for PK. “The concept often remain unclear to them,” he tells Wamda, “the challenge remains to convince them of what we do.”

He is optimistic about the outcome though, especially as The Assembly’s concept, he says “can be copied in Dubai and other Arab countries”.