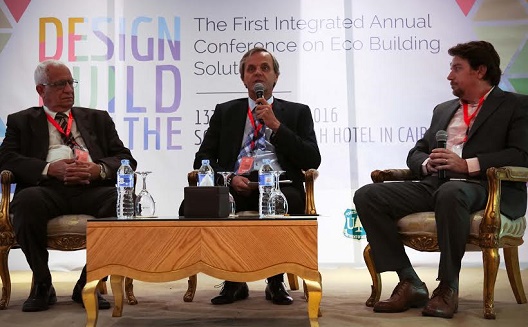 Sustainable and energy efficient buildings are becoming a priority around the world, as international data indicates that buildings are responsible for around 40 percent of total energy consumption, and 24 percent of CO2 emissions.

Even in Egypt, where a Green Code exists but is rarely implemented in the country’s ever-expanding satellite cities, awareness around the topic is rising.

Sherif Hosny, CEO of Schaduf, an urban farming company that installs and operates rooftop farms in Egypt, said the most critiqued aspect of green buildings was their high expense. Yet they still reduced electricity bills over the long-term, according to a report by World Green Building Council (WGBC).

"In the UAE, we spend a lot to make building bricks that are 50 percent recycled materials. We also recycle waste water and use it for plant watering, and we make sure to have plants everywhere, in order to create a comprehensively sustainable environment," he said, adding that the UAE had 40 percent of the total green buildings in the GCC.

"We atIISD aim to build more than one facility for managing waste in a profitable way through sorting, selling, compaction and recycling," she said. "This is [to be done] by visiting rural areas, studying their problems and applying technical solutions. After that, a miniature model would be created that is easily applicable in societies."

The situation in Egypt

Schaduf cofounder Tariq Hosny told Wamda that in Egypt, sustainability needed to be built on a collaboration between the public and private sectors.

The government has long paid lip service to the concept of a green economy, but given the myriad other pressures facing the country it has never been a priority.

Egypt Green Building Council (EEGBC) head Salah El-Haggar, however, said now this was not the case, as the government was leaning heavily on renewable energy to fill severe gaps in electricity supply and to bring in foreign investment.

"We expect for demand on energy to rise by 55 percent by 2030, which requires investments worth $22 trillion," he said.

Al-Haggar also announced the government's plan to launch Tarsheed, a rating system that builds on international building standards. The program will be active in May.

"Egypt needs to reduce consumption of energy from 24 to 50 percent, CO2 emissions by 33 percent, water consumption by 40 percent and solid waste generation by 70 percent," Al-Haggar said. "We are also in dire need to write a successful story in the chapter of green buildings in Egypt, and we will dedicate all our resources in this direction."

The future of investments in green buildings

Egypt’s environmental challenges have made adoption of green buildings obligatory if the country wants to limit the damage caused to the climate and the unmoderated consumption of energy.

Investments in solar energy alone in the Middle East are expected to grow to reach $50 billion in the next five years and the International Energy Agency expects that by 2020, 26 percent of energy globally will be produced from renewable resources.

But green buildings are where the real opportunity lies, if forecasts are accurate. A report by the Regional Center for Renewable Energy and Energy Efficiency predicted that investments in green buildings in the Middle East would reach $2.74 trillion by 2020.