Attention is shifting towards harnessing the powers of the environment for new energy sources, and the Middle East is securing its own place on the map when it comes to eco-friendly projects.

Wamda has created a list of five eco-friendly locations throughout the Arab world, which are shifting towards clean models of modern-day living. 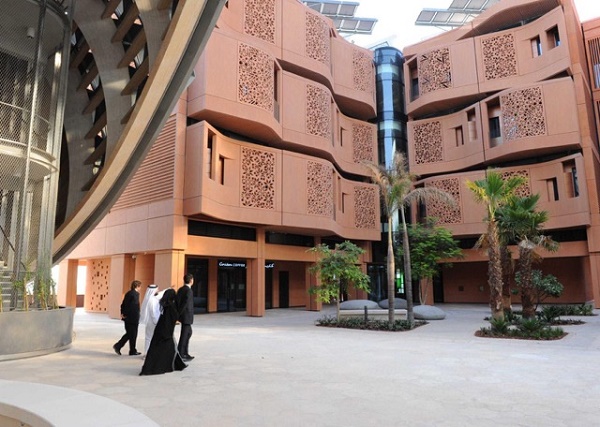 At the forefront of Arabic countries interested in ecofriendly projects is the UAE, ranking eighth of 150 countries in the 2015 Leadership in Energy and Environmental Design (LEED) list.

Masdar city, which lies 17 km away from the center of Abu Dhabi, is its showpiece.

Still in a developmental phase, it’s expected to be completed by 2025. The 700-hectare city has a mall, a couple of restaurant chains and several corporate headquarters, including the International Renewable Energy Agency and Masdar Institute for Science and Technology.

Masdar is fully powered by a solar energy station with 10 MW photovoltaic panels, spread over 22 hectares.

The station is the largest of its kind in the Middle East and extra electricity is fed into Abu Dhabi's main network. Masdar's biological wastes are turned into organic fertilizers, while others are incinerated as additional sources of energy. Industrial waste, like plastic, is recycled and reused for other purposes. 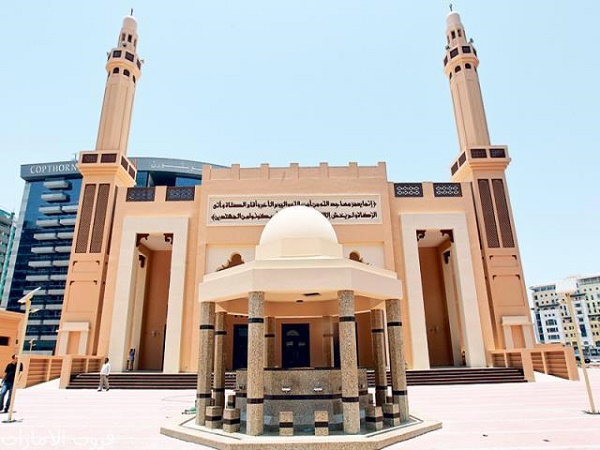 Launched in Dubai last year, Khalifa Al Tajer Mosque is the first eco-friendly mosque to be built in the region.

With a footprint of 45,000 square feet and capacity for 3,500 worshippers, the mosque was built with thermal insulating material and double glazed windows. Both were for the purpose of reducing the need for air conditioning, and therefore energy consumption.

More importantly, the mosque is powered by solar energy, with the outside street lights fitted with solar photovoltaic panels. Solar energy is also used to replace water heaters in the mosque. 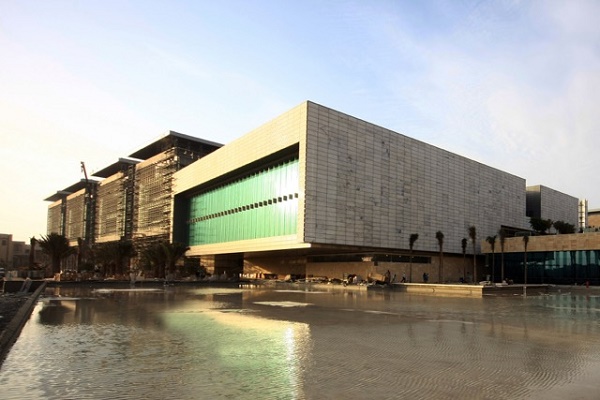 The KAUST campus. (Imgae via KAUST)

Established in 2010, KAUST was the largest LEED certified institute in the world at the time, with 27 buildings spreading over a massive 5.5 million square feet.

The university employs various clean energy and water recycling systems. All of the water used in KAUST is recycled and re-pumped either to university buildings, where it is used for watering plants and other non-drinking purposes, or to outside buildings in the city.

The university is also equipped with 16,000 square feet of solar photovoltaic panels that produce 4MW of solar energy. Its lightning systems have sensors that automatically switch off lights where there’s adequate sunlight, and 75 percent of the university's space is designed to be lit by natural sunlight.

The Bahrain World Trade Center, a 240-metre-high, 50-floor, twin tower complex, is the first skyscraper in the world to integrate wind turbines into its design.

The center was built in 2008 by the multinational architectural firm Atkins. It is equipped with three wind turbines, each 29 meters long, and aligned to capture Persian Gulf winds.

The sail-shaped buildings on either side are designed to funnel wind through the gap to provide accelerated wind passing through the turbines. The turbines provide 15 percent of the towers' total power consumption.

5. The Gate Mall in Egypt 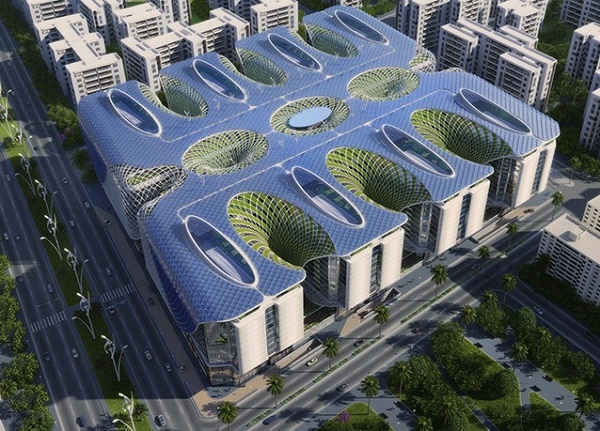 The Gate was designed by the Vincent Callebaut Company in Cairo in 2014.

The Gate residence, a smart-residence complex, is expected to be finished in 2019, costing almost $590 million.

It will include malls, residential apartments and a hotel.

Perhaps what most distinguishes the design is the presence of nine giant ‘trees’ - windcatchers that are vertically integrated within connected buildings. The ‘trees’ re-direct the wind so the buildings have natural ventilation, a method inspired by the ancient Egyptians.

The Gate will include photovoltaic panels placed on the roos of buildings. Electricity generated from these panels will cover part of the complex's energy consumption. Also, the uppermost floor of each building will be filled with gardens and parks that will absorb some of the heat from the sun.