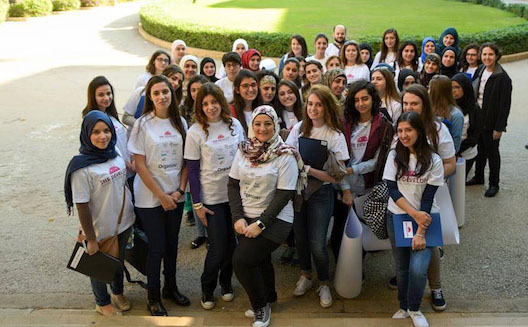 MENA's future developers pause for a photo at the She Develops hackathon. (Images via Karim Shehab)

A lot has been said about the lack of voice and opportunity for women in technology, especially in leadership positions worldwide. According to a recent IDC report, only 20 percent of all programmers in the world are women.

In the meantime, many reports say the IT industry is one of the hottest, with demand for skilled software developers projected to increase by 22 percent in the next 10 years.

The situation in MENA is no different. Demand for software developers is soaring, while the number of women in technology is decreasing. One the main reasons behind this is simply culture and stereotype. Throughout many cultures in MENA, women and men are expected to take on specific stereotypical roles in their career.

“I think the mainstream media tends to affect us more than it should,” said computer science student Wiem Ben Rim. “In movies, news, TV series, usually the geek techy person is a guy. It's hard for us to imagine a woman in power, as it is hard for us to think of a woman coder.”

"The situation differs from one country to another, and so we cannot generalize," she continued. 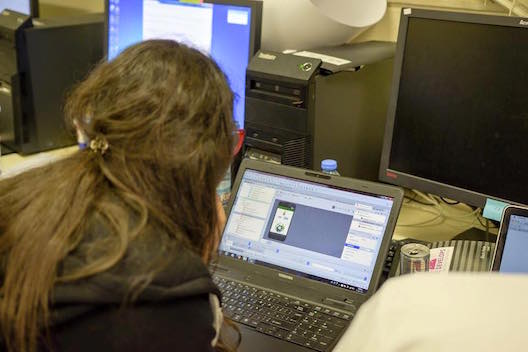 It doesn't make a difference if a coder is male or female. However, traditional gender roles in MENA prevent women from getting into tech.

The future, however, is not that bleak. A paradigm shift is waiting to happen, as many initiatives in MENA for supporting women in computing are starting to take good traction. One of these is She Develops.

They brought in female students from seven universities across the country, who have diverse technology backgrounds (computer science, engineering, information systems), and to create a supportive atmosphere for them to building mobile applications.

The goal, to help students develop the technological and leadership skills critical to jobs in the software industry, as well as offer women a place to share ideas, experiences and to help each other succeed.

“Coding is not gender biased, anyone can do it, someone just needs to point that out,” Ben Rim continued.

The hackathon was preceded by three free workshops from November 13 to 18 at AUB that covered business ideation, Java programming and Android app development, provided by Foo.

She Develops was sponsored by the AUB computer science department, Google Developers Launchpad, IEE, and FOO, in partnership with Wamda and Arabnet.

Wamda employees were available throughout the event for mentorship and the winning teams were offered free consultations to help them move their ideas further forward. 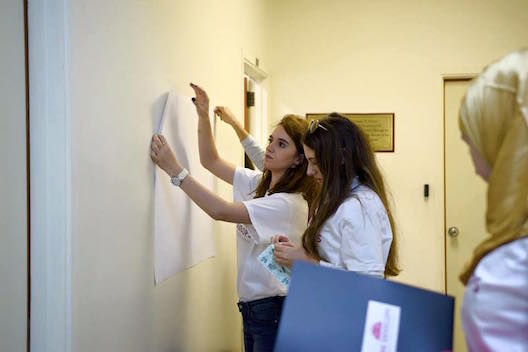 Contestants had to find a solution to a problem and address it via an Android app that they built.

The brief was simple. Hackathon participants were asked to select a problem in line with the UN Millennium Development Goals, to come up with a solution for the problem and write an Android mobile phone application to solve it.

Organizers said they were surprised by the turnout and the caliber of solutions to real problems.

"Participation was much bigger than we initially expected,” said Mona Itani, AUB professor and event organizer. “At first we thought it would be great if 15 students sign up for the hackathon, more than 50 women ended signing up for it."

In an interview with AUB, Alaa Almutawa, a computer science student, expressed her excitement about the event.

“I’m from Bahrain, and the concept of hackathons is not very popular, so I never got the chance to apply for or participate in one,” Almutawa said. “I loved the idea, and participating in it will help me interact with and meet people who share common interests and are already in the field.”

Applications were evaluated by a panel of judges from the tech and entrepreneurship industry: 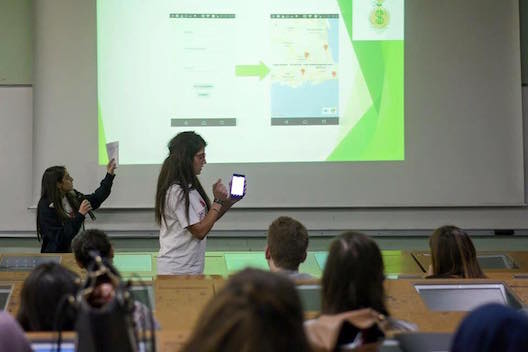 1. The Notifier - An emergency notification app that alerts people who are nearby. The application runs in the background silently. An SMS is sent to selected contacts and an audio session gets recorded when the phone is shaken.

Prizes include an internship from FOO, office hours with experts from Wamda, $500 in matched funding from Zoomaal on their crowd funding project, and shopping vouchers.

Prizes include, $500 in matching funds from Zoomaal on their crowd funding project and free tickets to the Arabnet conference in Beirut.

3. Blood For Life - An app that connects blood donors with those in need in times of emergency, and hepls schedule frequent blood donations and blood drives.

Prizes include, $200 matching funds from Zoomaal on their crowd funding project.

The team Trash Bonus received an honorable mention for coming up with the “most innovative solution”, a service that tackles Lebanon’s trash crisis. Trash Bonus connects households with recycling institutions so they can exchange their recyclable waste for cash.

Other applications tackled various problems such as access to education, insufficient donation channels, and traffic congestion.

"The students showed a lot of drive and ambition despite the fact most of them if not all had little to no prior experience building real world applications," said Mohammad Sleiman Haidar, Wamda web developer and team mentor.

"Students showed great talent and skill, most of them did not have any background in Android development and within one day they were able to produce functioning apps that solve real world problems,” said Nisreen Deeb, event organiser and ArabWIC ambassador in Lebanon.

This event showed so much potential on the level of technical skill and talent that MENA female students in STEM programs possess. All the participants confirmed the importance of such events in sowing the seed for a healthy and balanced workforce.

"A much needed initiative, great organization and should be repeated in different areas in Lebanon," said team mentor Constantine Nicolaou.

With the demand for software developers in the region increasing rapidly, every graduate with a computing background has a great opportunity to ride this wave and build a sustainable career.

It is only by changing traditional mindsets, accepting one another and working together that we can guarantee a healthy industry and bright future in technology. Sparking interest in software development on the educational level is a big catalyst for that, and that is exactly what ArabWIC is trying to achieve.