Despite having perfect health, Ahmad ElKaragy always dreaded having colds for one reason: he often forgot to take his medication regularly.

The fact that he was well educated and knew the risks of not following medication instructions to the letter, didn’t seem to make a difference.

This personal experience, coupled with his family's medical background (his parents and sister are all doctors), led the founder to develop the Medica Reminders app.

ElKaragy graduated from the University of Alexandria in 2008 with a degree in computer engineering. He then enrolled to study computer science, but left after only four months to work at an app-developing company which gave him the skills he’d need to make his own.

By 2010 his own app and the parent company IRWAA were ready for takeoff. ElKaragy had spent four months working on it, and launched a version for Nokia phones during the Calling All Innovators competition in Egypt.

The app has been downloaded a little bit more than 20 thousand times, where 17 percent of the free users opted-in for the paid service. He’s thus making a profit but that’s not stable. He’s now employing developers based on his income. Medica reminders is his main project, he developed two other apps in the past and sold them as a third-party developer.

Doctor Mamdouh Gabr, a consultant in digestive and liver diseases, believes Arab patients and Egyptians in specific, don’t commit to taking their medications on time and with the right doses. This affects how quickly their bodies respond to treatment, notably those who suffer from chronic diseases.

“Patients often don’t look for treatments unless the symptoms are very clear and worrying and they ignore taking medications once the symptoms disappear,” he said during a call. Medica Reminders, in his opinion, might be a good tool to increase youth commitment and motivate them to take their medications on time. He doubts however the older generation, which the app targets the most, would find it easy to use the application and set the right times for each medication, since they still find it hard to use mobile and apps in general.

The company, which was initially bankrolled by ElKaragy’s father, was set-up to market the app and offer app development services as a means to bring in some cash.

But the venture didn’t come without difficulties: the young founder was inexperienced in running a company and had limited experience in marketing and sales.

"I did succeed in winning prizes and getting funding for my company from competitions, but my problem was with all the risks you have to tolerate long enough until you get serious results," he said.

Today the company has four full-time developers, and is based in a small office in Alexandria.

The app allows the user to upload a snapshot of the doctor's prescription along with the names, doses and timing of medications.

The app sends a reminder at the registered timing of each medication, and displays the required dose. It also reminds the user of doctors' follow-ups, and medical recommendations can be recorded as voice notes as well as written notes.

An android version of Medica Reminders was launched in 2013, followed by an iPhone and Windows phone versions in 2014. He started by developing for Nokia phones because he used the app to apply for a Nokia Apps competition. He then ported it to Android and iOS when he had adequate time and resources.

The Android version is free and profits come from its ads, but the full iPhone version costs $3. The free iPhone version comes with limited features, allowing only two lists of medications, with two drugs on each list.

However, the app does not include a list of meds specifically available in the user's market, with their commercial names and doses available in pharmacies.

iOS and Android stores offer several apps developed for the same purpose as Medica Reminders, such as Pill Monitor and MedCoach.

But ElKaragy believes that getting patients to stick to their medication as prescribed (a process termed ‘medication adherence’) is just the beginning of what can be offered to facilitate patients' lives. 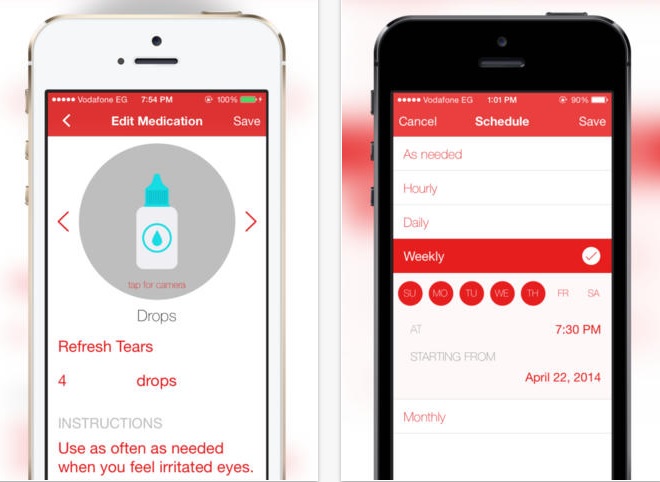 He plans to add a slew of features that he believes will give the app a competitive edge.

"My aim is to turn the app into a comprehensive package that helps in maintaining the patient's comfort, like online booking of doctor's appointments," he said. "I also aim to market this package for institutions that service patients, like pharmacies and hospitals."

ElKaragy is in the process of finalizing a deal with a German company to have Medica Reminders marketed in pharmacies in Germany.

One condition, though, is to have the logos of the pharmacies visible in the app. The patient can then be notified on his periodical medications, as well as on the medications that are present in limited quantities.

ElKaragy plans to follow the same model with local hospitals, where patients would be given the app and reminded of their follow-up appointments.

These solutions will, in ElKaragy's opinion, save patients a lot of trouble. He is working on features that allow patients to search for doctors and book check-up appointments, similar to the AbiDoc service.

The challenge, though, is to get users to adopt this technology.

"It may be better to start from markets abroad," said ElKaragy. "The app market in Egypt is not developed enough to adopt completely new apps, so I think it's better if we start abroad. And after we develop a good reputation, we will find opportunities in the country."