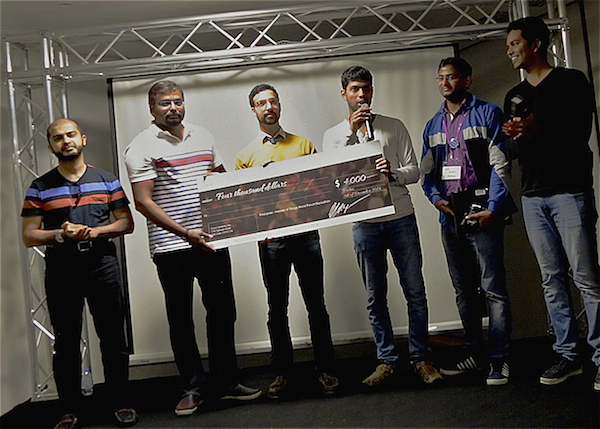 In first place SmartX team with the judges. (Images via BeMyApp)

Right on the heels of the Internet of Things World Forum (IoTWF) in Dubai, Cisco DevNet hosted the first ever IoTWF Hackathon in Dubai.

Lasting two days, the Hackathon brought 90 participants from all over the world to compete for a total prize pool of $8,000.

The Hackathon began on Friday December 4 with an introduction to Cisco’s IoT technologies that attendees then had to incorporate in their final product.

The Internet of Things (IoT) is, essentially, a new paradigm for extending the Internet to “things”, explained Mike Maas, technical evangelist at Cisco. The “things” are all the currently disconnected devices.

“IoT represents a shift in that not only can humans engage in dialogue, but things can too,” Maas said. “We now have a global infrastructure of connected networks. The goal is to get to, what we call, dark assets and light them up, make them available and visible.”

While the IoT World Forum is a way for industry leaders to learn of new IoT solutions and exchange ideas, the hackathon is a platform to engage the local development community says Akhilesh Sah, marketing manager IoT at Cisco.

“The hackathon helps us create awareness of the technology, enable developers to come up with innovative ideas and then develop solutions around it,” Sah said. “The idea is to help [the developers] think of the bigger picture and what they can achieve in the long run with their final product.”

To ease the challenge of understanding and using the technology, Cisco deployed mentors like Maas who worked directly with the coders and programmers. The hackathon screening process had attendees present their idea in one minute, and on one slide.

Dubai student Madhur Tipnis was among the few students of Manipal University selected to participate in the Hackathon.

He came with a friend, but like most others, formed his team on the first day. At the end of the designated 25.5 hours of coding, Tipnis and his team built and presented a prototype of DART - digital access response technology. DART works as a shock sensor to aid the elderly during emergency health situations.

“I loved the hackathon,” Tipnis said. “I found myself in a place where I learned a lot from the people around me. It was great seeing a lot of people [in Dubai] working towards innovation.”

The judges panel saw 18 product demos on the final day, ranging from solutions in retail to parking to healthcare. The key guidance Maas offered all teams was to “not stray away from [their] own domain too much.”

Four software developers from Emirates Airlines immediately took to that advice and built SmartX, an app to enhance the airport experience for transit passengers worldwide using Cisco’s CMX and Instant Connect IoT technology. The team won the grand prize of $4,000. 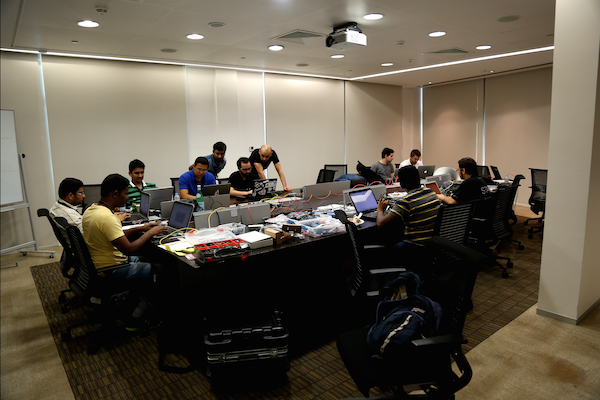 Coders at the hackathon. (Image via BeMyApp)

“We are going to split the money, of course,” said Masood Sofi of SmartX. “IoT is the way forward. We thought of the idea here and developed the product to take it to the future.”

The second prize of $2,500 was awarded to team Saedni for its healthcare IoT solution. Third prize went to Shelfmetric, an app that measures market shelf details, with $1,500. Both teams were from Dubai.

For most coders, developers and industry professionals, a hackathon is a platform to network and learn from each other according the Alexandre Sutra, Innovation project manager for BeMyApp, the hackathon organizer.

“Here there was a strong energy to learn and all of them were very fascinated by IoT technology,” Sutra said. “The Hackathon is a perfect way to build a prototype, do fast coding, come up with a service and explore your limits.”