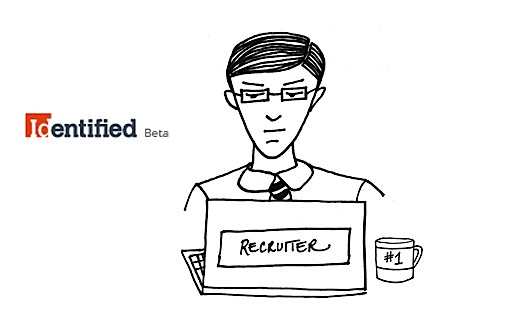 After Zynga’s $10 billion IPO, it’s clear that adding game mechanics to a vast social network is a recipe for success. Yet the recipe isn’t limited to gaming; job search platform Identified is proving that Zynga’s model has traction not just in personal but also the professional space.

The Silicon Valley-based platform, which launched three months ago, could be called a channel for receiving job interview feedback … before you even get an interview. Leveraging Facebook, it uses your job and education history, along with algorithms that track what companies search for, to generate a score indicating how desirable you are on the job market.

It also taps into your social networks to show you how you stack up against friends, and demonstrates who companies have hired recently that look similar to you. As the site now boasts access to 75 million Facebook profiles, it can also easily tell you who you might know or be acquainted with at a given company of choice.

While LinkedIn may be currently the heavyweight in the job search space, with stock prices that soared to twice its initial IPO when it went public this May, Identified is carving out space in the market by pursuing the customers that LinkedIn may have overlooked, aiming to capture a generation of job seekers under 30 that grew up on Facebook.

On LinkedIn, says Wallace, 50% of profiles have been logged into only once, 7% return monthly, and the average age of its 6.5 million users is 44. Perhaps these metrics reflect why LinkedIn was once jeered as “Facebook for losers.” But the mostly static site doesn’t need high engagement, he points out. Identified, on the other hand, is going for the demographic that LinkedIn missed- the 74 million Facebook users for whom “the idea of joining a new social network is foreign."

Identified is also targeting those users whose professional background isn’t conducive to joining LinkedIn, like those looking for a job in a coffee shop or retail store. “It's very hard to find those candidates on LinkedIn,” he points out. Identified aims to open that channel for companies searching for those candidates. “It's probably a lower education demographic, and younger, but it's a demographic that companies have no ability to access right now,” he says.

While Identified is still a fledgling startup, it will likely have more profiles on board by the end of January than LinkedIn has after 8 years, says Wallace.

The fact that the company has garnered interest in this region from heavyweight angel investors Fadi Ghandour, Samih Toukan, and Hussam Khoury, and has already closed two rounds of funding at $1.5 million and $4 million, $1 million of which came from Middle East investors, is no accident. Not only is it carving out a market niche, but Wallace and his co-founder Adeyemi Ajao (who built tuenti.com, the largest social network in Spain) have extensively studied Zynga’s meteoric success to determine how to extend its model. They’ve pulled three take-homes from the gaming giant:

Firstly, they’ve worked to integrate social networks into their consumer experience. Looking at Zynga inspired their approach to improving the likelihood that someone will get a job by showing them who they know that can help them get that job.

Secondly, they built their Identified Score after examining how Zynga used game mechanics to drive exponential growth on Facebook. “The score was a mechanic that we felt people wanted,” says Wallace. It’s now the most widely-adopted score in the professional space, he notes.

Finally, Identified also looked under Zynga’s hood. “Zynga is the most analytics and metrics-driven company on the internet,” Wallace points out. “They run like a high-end sportscar, with a series of gauges telling them how they’re doing on a minute-by-minute basis. They can iterate and test at an extremely fast pace. We looked at that and tried to emulate it, building a scaled-down version.”

In this region, the platform could work simply to open channels of hiring that haven’t been opened before. “There are companies in the U.S. that want to hire in the Middle East and North Africa, and companies in the Middle East that want to hire from the U.S., but currently there isn’t a great place to go and see talent worldwide; labor markets are very regionalized,” says Wallace. By building on a global platform like Facebook, Identified aims to democratize job search.

The site still has steps to take to make its platform even more useful, as a general score based upon the U.S. market won’t necessarily reflect a candidate’s desirability in a specific sector, let alone in a region like MENA. Yet it’s on the way to becoming more global, set to launch in 8 languages including Arabic on January 12, 2012. No doubt with the help of Fadi Ghandour, who Wallace says is one of the most “hands-on value-added” investors he’s ever had, the site will continue to take methods for localizing into account.

In a few years, when job seekers now under 30 begin to rise the ranks and take over as CEOs, LinkedIn may be, as Seeking Alpha put it, LinkedOut.