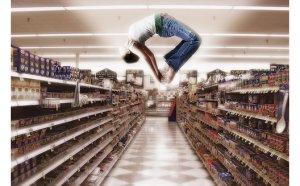 If people typically watch a kung-fu flick or a trashy teen comedy on DVD before the documentary they rented several days earlier, it only stands to reason they will also order ice cream from the online grocery for tonight and broccoli if the delivery is scheduled for later in the week.

That was the hypothesis that drove Katherine Milkman, an operations and information management professor at the Wharton, and two colleagues to study online shopping patterns to see if consumers were indeed more likely to order "want" foods like high-calorie desserts and snacks for more immediate delivery while tending to order "should" foods like fruits and vegetables several days in advance.

Milkman's research found that for the most part the longer the delay between placing an online grocery order and delivery, the less a given customer spends in general and the greater percentage of that order is allotted for healthier items, like produce, than for junk food. "Spending decreases as we order food further in the future," Milkman says. "But the more immediate the gratification, the more freely we spend."

Her findings on consumer habits in online grocery shopping are detailed in a paper titled, "I'll Have the Ice Cream Soon and the Vegetables Later: A Study of Online Grocery Purchases and Order Lead Time" that was published in Marketing Letters. It was co-authored by Todd Rogers of the Analyst Institute and Max H. Bazerman of Harvard Business School.

Milkman's research into the psychology of consumer decision-making was partially inspired by the rise of Internet shopping because that trend has created a pool of data that is both extensive and much more exact than information that could be obtained through surveys or other research methods. Although online shopping once lagged behind other forms of commerce, by 2006 it had become a $100 billion a year industry.

"The Internet has made it possible to study human decisions in an entirely new way," Milkman notes. In particular, the data created by online shopping can help researchers track the buying habits of a particular anonymous individual consumer over time and focus on the impact of different variables on consumers' decisions.

Over the course of several research papers, Milkman has sought to learn what this new fountain of data can tell us about the psychology of shoppers, particularly as it relates to their habits regarding pleasurable items they crave, and items that they feel they "should" purchase given their long-term interests and well-being. The authors of the paper were particularly interested in online grocery shopping because, unlike many other kinds of online shopping, customers must typically schedule the delivery of food items for a more specific time.

The researchers note in their paper that a growing body of evidence shows that "people behave more impulsively when the outcomes of their decisions will be realized in the near future rather than the more distant future." They cite a series of recent findings showing that people are often willing to accept a dramatically smaller immediate payoff rather than waiting for a larger later payoff; that people are more likely to donate their time to a charity two weeks from now rather than tomorrow, and that voters are more likely to support difficult "should" policies when they are to be implemented at some future date.

Milkman has already looked at the "want" versus "should" dilemma for shoppers in a somewhat different venue: online DVD rentals. In a previous paper written with the same co-authors, "Highbrow Films Gather Dust: Time-Inconsistent Preferences and Online DVD Rentals," the researchers found that when renters order a high-brow flick like "Schindler's List" and a low-brow movie like "Talladega Nights," they tend to watch the low-end movie first (and return it faster) even if they were rented in the reverse order. The authors also discovered that the practice seems to diminish over time as customers learn to be more realistic about their habits.

Currently, Milkman is working on a third paper that examines an additional trigger that leads consumers to select "wants" over "shoulds" uncertainty. She says her new research shows that consumers involved in an uncertain situation are much more likely to crave and to purchase "want" items like chocolate.

In the study of online grocery shopping, Milkman and her co-authors analyzed the buying patterns of individual customers of a North American urban online grocery operation over the course of the 2005 calendar year. The authors found that while many orders where placed just one day in advance of delivery, enough were scheduled two to five days out to compile considerable data.

One challenge for the authors was determining what grocery items belonged in the "want" category and which to classify as "should" items. To establish this, Milkman and her colleagues paid 154 people to take part in a survey to rate some 117 different categories of food products. Not surprisingly, the items classified as "wants" include such high-calorie staples as chocolate and other types of candy or bags of chips, while the "should" items include fresh fruits and vegetables as well as meats and seafood.

The results, according to the paper, clearly show that spending is higher a sign of impulsivity