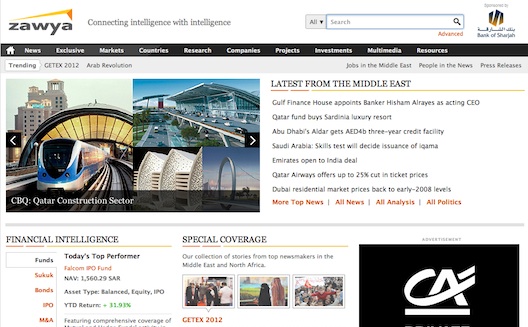 It's not just the sleek new interface that's evolving at Middle East business news portal Zawya. The media outlet is preparing for a multi-million dollar sale at the end of the month, The National has reported.

The comprehensive platform, which offers breaking financial news, stock market tracking, business intelligence on regional economies and sectors, and investment databases, will likely be sold for tens of millions of dollars. Zawya's current CEO, Gunnar Skoog, reveals that Zawya will have a new owner within 6 weeks.

Skoog confirmed that four primary companies were among those vying for a stake of the media site: business data service Thompson Reuters, mergers and acquisitions intelligence service Mergermarket, part of FT Group (a division of Pearson), media company Emap, which owns Middle East intelligence portal MEED and business news site AMEinfo.com and is partly own by the Guardian Media Group, and Indian credit-ratings agency Crisil. Zawya's partnership with Dow Jones will also be taken into consideration.

Zawya, which the National reports now has 5,000 paying subscribers and around 750,000 monthly unique visitors, and employs 200 staff in the UAE and Lebanon, and has worked hard to build its community and readership through social media engagement and community-targeted products. Skoog pledged to the National that the site will have "double-digit growth" this year.

While Zawya is solidly in the past for its founding members, the exit will potentially boost their ability to continue supporting and building startups, while the MENA ecosystem as a whole stands to benefit from the example of another sale in the online media space (following AMEinfo's purchase by Emap in 2006 for $24 million). Whether Zawya can continue to generate revenue with a subscription-based model and not follow AMEinfo down the path of being potentially offloaded again remains to be seen.

As late as October 2011, private equity investor Saffar Holdings, which acquired a 60 per cent stake in Zawya in 2001, hinted that the deal would close soon, with CEO Mishaal Al-Usaimi saying, "We expect to make a decision during the first quarter of 2012 as to whether we are willing to entertain an offer for our investment in Zawya or, given Zawya's strong growth under its new management team, to retain our stake."

U.K.-based corporate finance advisory company Arma Partners will advise on the sale and Zawya's transition. Stay tuned for the announcement.