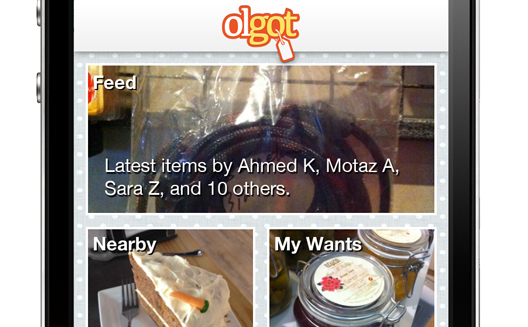 Ever since co-founder Laith Zraikat left Jeeran earlier this year, the Jordanian tech scene has been curious what he’ll do next. He’s not one to rest; his martial arts background speaks to a calm intensity that he also brings to coding and building apps. It’s unclear if the man ever goes off duty.

After 12 years of building Jeeran, which just secured funding from seed fund 500 Startups, Zraikat is ready to bring that focus to something new. Since March, he’s been crafting Olgot, a mobile application that will allow users to say they “like,” “want,” or “got” items around them. In contrast to Jeeran, which now focuses on local place reviews, Olgot, which means “to grab" or "catch” in Arabic, delves into the product layer, allowing consumers to share and comment on individual products – chocolate cake at Café Strada, an iPod at electronics store Smart Buy, or a piece of art or t-shirt that they want.

The idea is to make a place's offerings more transparent, allow consumers to discover new products, and help companies receive customer feedback by item- information that often gets lost in the long list of reviews on place-review platforms like Yelp and Jeeran. "I believe that there needs to be a company that is encouraging people to share and discover more of the products that they see,” says Zraikat.

Also, similar to the way Foursquare’s checkins encourage re-engagement with a venue, Olgot would encourage users not just to read reviews, make a choice, and then close the app, but to continue to post about what they are enjoying, he says. “I’m hoping to have multiple engagements at each location per visit.”

The app prototype that I saw was sleek, with good user experience and a very simple tessellated wall that looked like Pinterest meets Flipboard. The social strategy also seems sound: the app will integrate with Foursquare for venues in Amman, where it's being tested, and will allow users to share items on Facebook and Twitter. The tricky part will be the basic issue all social apps face: can it get enough traction for the social element to take off? Will enough users want to rate, price, and share elements of their daily lives? Will it be fun enough?

When it comes to answers, Zraikat is not the first to come up with the idea. Silicon Valley-based Hollrr, which sprung up in February 2010, let users share products and services on Facebook and Twitter, using badges, Foursquare-style, to turn sharing into a game. Yet the app went dead quickly, posting its last tweet in June 2010. Checkpoints, which launched in the U.S. later that year (with a name that wouldn't work well in this region), offered users the ability to check-in to products and gain coupons by scanning them. It received almost 100,000 Likes on Facebook, yet is restricted to items with a barcode.

Another recent example includes Stamped, which was founded by ex-Google employees last November and allows users to simply give a restaurant, book, movie, or song (all aggregated from online sources) their “stamp” of approval. As Zraikat pointed out, it doesn’t allow users to rate a variety of products in those restaurants, and it’s limited to online content.

Olgot is perhaps most like Oink, which Digg founder Kevin Rose launched last November. The app allowed users to rate individual products and categorize them using hashtags. It saw 10,000 downloads in two and a half weeks, most likely thanks to Rose’s brand recognition, TechCrunch points out. It was an experiment, explained Rose, “first we have to prove that there’s value in seeing a bunch of people help curate what the best stuff is in a given place.” Yet by March 31st, the site closed.

Zraikat has heard that the experiment was a success, in that the answer was yes- people do want to rate products and share them. Google acquired the Milk team, including Rose, and may try to leverage the idea in a future product, he guesses, especially after their acquisition of Zagat last year.

Yet Zraikat has built Olgot to stand apart from these other apps with one critical differentiator: he plans to encourage users to post the price of each item, to eventually build in a mobile payment mechanism. The app will also include wishlists, will get smarter at predicting what you like and don’t like, and will incorporate privacy controls so that users can “like” or “want” items to one friend group but not another- an aspect that I brought up as a concern.

If Zraikat can test and discover what’s truly sticky among Olgot’s multiple functions, it will have global potential. There’s no need, he points out, to only focus on the local or regional market. “Barriers to global entry have been shattered by Foursquare. Thanks to their platform, the local recommendations space has gone global.”

He’s looking to leapfrog from Jordan to the U.S., where mobile payment integration and uptake will likely be easier. Yet in the Middle East, Olgot will have the advantage of being a first mover in the space, especially if it integrates mobile payments. For now, the app is in invite-only beta- there’s no URL, but you can look for evidence of testers’ shares on Twitter and Facebook.

What do you think- would you share, rate, and want to buy products that your friends are enjoying?