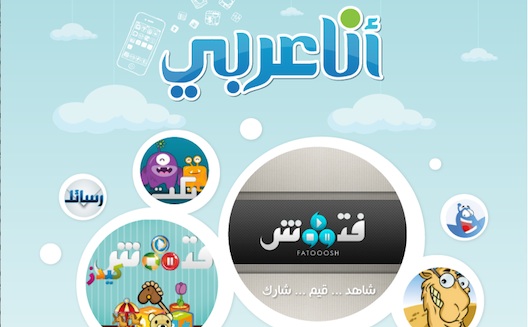 N2V has long focused on startups that exclusively create Arabic content, and this is no exception with its support for iAraby, a mobile application and gaming development company focused on creating platforms and games tailored to the Arab World. (n.b. the iAraby URL is correct but the site is currently down).

iAraby's primary product to date, developed during Startappz's 13 week accelerator program, is Fatooosh, a device-agnostic platform that allows users to consume video content seamlessly when switching between their mobile, tablet, computer, and Smart TV devices. It currently runs on iOS and Android, but not Apple or Google TV yet; it's initially aiming to be on Samsung Smart TV in the region.

Rather than compete directly with other video-on-demand platforms like Istikana, which recently launched an application on Samsung Smart TV and Cinemoz, which also offers exclusive content, Fatooosh will simply be an aggregator of all content channels, says Mohamad Khawaja, CEO of Startappz. "Platforms like Istikana, Cinemoz, Kharabeesh, 3alarasi could all have a channel on Fatooosh TV."

While Startappz is currently finalizing a second round of investment in iAraby, the ink is not yet dry; this announcement refers to their initial round of seed investment. The mobile accelerator typically invests US $20,000 for a 20% equity stake, yet in iAraby's case the investment was almost double for a similar equity stake, says Khawaja, given the cost of development in the UAE and the value of the team.

The UAE and Saudi Arabia are prime markets for iAraby, as an estimated 60 percent of mobile phone users in Saudi have smartphones, and the UAE is projected to hit over 70% smartphone penetration by 2016, up from 47% today, according to N2V. In a statment, iAraby CEO Ahmed Barqawi said, “This is exactly the right time for mobile; MENA market is hungry for high quality Arabic applications, to fill the gap in the market as smart phone penetration growth is exceeding all expectation!”

iAraby is also the first company that Startzapps had announced investment since its launch in January this year. Its first cycle began in April and has just concluded; expect announcements for Appz Door, Ideables, Easy Charge, and Jasem the Hero to follow soon.

Before launching the mobile-focused accelerator, Khawaja and his colleagues did extensive research, polling leading mobile app developers in the region like Amr Ramadan of Vimov, which created successful iPad app Weather HD, on the best ways to develop mobile applications for a global audience.

This approach marks a shift in N2V's approach, away from Arabic content, and towards global-facing products. Another portfolio company, Ideables, is looking for distributors in South Asia and Eastern Europe, not just the Arab World, with its first mobile game, and others will likely follow suit.

"The mobile industry is fresh worldwide, so we can compete globally. Now is the time to take advantage of this opportunity," says Khawaja.