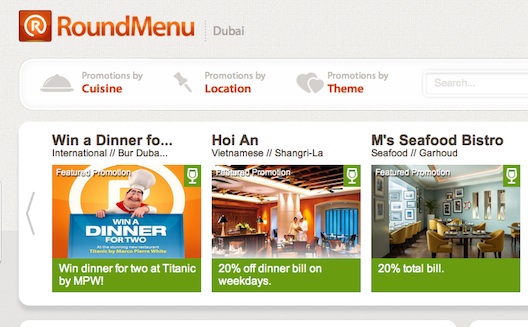 Ever since its founders left Zawya to launch internet incubator Honeybee Tech Ventures, they've been working on introducing new concepts to the Emirati and regional markets, from Laimoon's algorithmic approach to sales and marketing job search, to founder Zaid Jawad's side project, Swaphood, which aims to build a network where people can swap goods in their local city. (Although Zawya is far behind them, the media site's rumored $40 million acquisition probably doesn't hurt the launch cycle).

The newest idea that they've launched and localized is RoundMenu, which has been quietly running for over a year, but newly relaunched three weeks ago to offer customers deals and discounts on restaurants in Dubai. It's gaining traction; the iOS app has now hit #1 in the UAE Apple Store in the Food & Drink category, and its Blackberry, Android, and iOS have together seen over 1800 downloads thus far.

Before anyone asks, the it is not a daily deal site. The deals offered run continuously, aren't activated by a given number of people purchasing the deal, and aren't limited to a specific number of recipients when you cash in the deal. "It's a completely different value proposition," says co-founder Zaid Jawad. "Rather than being a reactive choice based on what's available that day, it's proactive consumption."

Here's how it works: customers make an initial request to buy a voucher, say for 25% off at a given restaurant, then receive an SMS requesting that he or she confirms the booking. When customers confirm the voucher, they have to specify the day on which they will redeem it.

The primary advantages of this model,  as opposed to a daily deal or a typical coupon booklet, seem to be:

The downside of this approach, however, is that it cuts out a healthy part of the potential market: travelers without an Emirati mobile line. Currently the platform only supports confirmation and purchase over a +971 number. Yet in the future, RoundMenu will add the ability to buy bulk credit with a credit card, over a well-known payment gateway like Network International.

Also, those without a local number currently can't see the price of the deal, another element that could lead to an overabundance of requests without confirmations.

Another potential issue is that customers must choose the moment they consume the deal. This is essential for outlets, who need to know how to anticipate traffic, and yet many customers confirm relatively late, once they're absolutely sure. "People tend to confirm right before they go to the restaurant," says Jawad.

However, those restaurants that need advance notice can stipulate that on the site. The immediacy also may benefit restaurants in the end, rather than resulting in a sudden unexpected overflow of traffic that daily deals site can produce, or several users who buy coupons ahead of time but never actually make the effort to cash them in.

Jawad says that two years of watching traffic continue to trickle to the initially unmarketed site has validated the market for the concept, but the next several months will be a better test of whether this model can scale to be truly profitable, and whether travelers will take to buying in bulk credit or whether a better model can be developed for non-locals.

At the moment, Jawad says RoundMenu is focusing on Abu Dhabi and the other Emirates, then planning to expand to Lebanon and Saudi Arabia. Ultimately, it may move beyond restaurants as well. "The concept of convenience can apply to other domains," says Jawad.

If it does enter the broader consumer space, it will be interesting to see if RoundMenu can tackle the location-based mobile deal space for offline retail, and become a real threat to daily deals.

What do you think- have you used it? Do you find the model convenient?