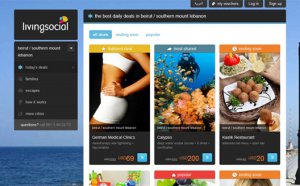 The National has reported today that global daily deals company LivingSocial is priming to sell its assets in the Middle East and shut down operations in the region.

Little over a year after the groundbreaking acquisition, which marked a high point for e-commerce in the Middle East and North Africa, the UAE-based publication is reporting that an internal email sent by LivingSocial "laid out the financials of its Middle East operations ahead of a possible sale," with a deadline aimed at selling the site's subscriber base in the UAE, Lebanon, and Egypt, by the end of the month. What will happen to the company's staff of 90 remains to be seen.

The National also cites the fact that the Dubai Department of Economic Development may be looking to institute regulations for internet businesses in coming years, after the boom in subscribers in recent years following the launch of over 20 daily deals sites.

Paul Kenny of LivingSocial rival Cobone chatted with Wamda about the DED developments, revealing that the regulations would only help larger daily deals sites like Cobone, which now claims 1.5 million subscribers and sees 100,000 visits a day. Cobone has been chatting with the DED since its launch in 2010, alongside other companies in the space, Kenny reveals. "We're looking to work with the government to build a bottom-up approach to regulation. There's no one who better understands how the e-commerce space works than the companies working in it."

Increased regulations for internet companies would protect larger companies like Cobone from smaller fish that crop up overnight and may not meet standards. Even Groupon UAE changed its CEO twice in the past year amid complaints about customer service; regulations would enhance the repercussions for company failures. "At the end of the day," Kenny points out. "regulations would protect the customers as well as businesses investing in the region."

Neither Kenny nor Dan Stuart, Managing Director of the MidEast for LivingSocial, could comment on the rumor, but it generally bodes well for Cobone, which claims to be the biggest daily deals site in the region; LivingSocial has been their biggest rival to date.

While competitors are cropping up daily, the rumor that LivingSocial could pull out of the region stands as a warning to those looking to compete in the daily deals space that it's not as simple as it may seem to be profitable. LivingSocial itself is still recording losses, The National reports, having narrowed its losses to US$93 million (Dh341.6m) in the second quarter of this year. Perhaps what once seemed like a surefire cash cow- daily deals in the gulf region- has the become a white elephant for the international company in the wake of scaling too quickly. Whether true or not, the rumor confirms that international daily deals sites are tightening their belts, and the beginnings of the daily deals backlash that hit the rest of the world last year has now entered the Middle East.

For more on e-commerce in the region, watch Dan Stuart's lively moderation of our recent CoE panel on Payment Gateways: