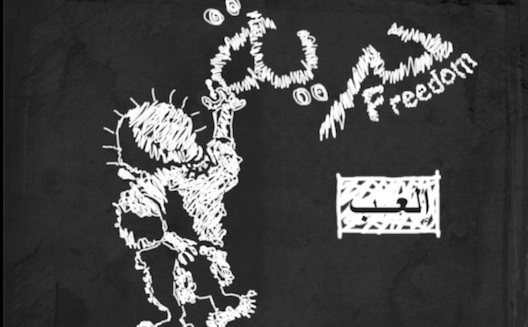 Today, GameTako has announced the winning teams from its second Game Zanga competition, which brought over 240 game developers together this July to develop Arabic games within 72 hours.

Of the 43 final games, which were each created under the community-chosen “Freedom” theme, GameTako has announced that Freedom, built by Ahmed Majdoubi in Morocco, took first place, winning US $1,000. In second place, winning US $500, was Voice of Freedom, developed by Betenjam, Egypt, and in third place, winning US $250, The Seven Habits of Highly Effective Fleeing Mice, built by Abdullah Konash, Ahmad Al Haddad and Maan Al Ashqar, Saudi Arabia.

The winning game, Freedom (Hurriya), which is based on famous Palestinian cartoonist Naji Al-Ali’s “Handala” character, is a skill-based game with gorgeous chalkboard-style graphics. This is one that should be adapted for iPhone, as it's perfect to play on the go, and it's built on HTML 5. The player, acting as Handala, must navigate a maze by rotating walls to walk to the exit. The limited number of rotations seem easy enough to use in the beginning, but the game gets harder.

The second place game, Voice of Freedom (Sout al Hurriya), is an arcade game, also built on HTML 5, which proves incredibly simple to play, but very difficult to win. The nizam, or system, is a large tank that fires missiles at you at regular intervals. To win, you must “call for freedom” by approaching other players and pressing z to send out a shockwave that transforms them into compatriots and helps you defeat the nizam. It’s simple, but clearly speaks to the region’s resistance and political upheaval over the past year.

“All of the games were fantastic,” says GameTako founder and CEO Abdullah Hamed. “The difference between them was so close- fractions of a point- that it was hard for us to not give prizes to those that didn't make it, but it was simply up to the judges. Everyone surpassed all expectations. We hope that they continue to build games independently and don't just rely on competitions.”

GameTako (as in Hamed himself and GameTako’s graphic designer) also built an in-house app during the Zanga, Dino in Space, as a friendly way to take part, but not compete, in the competition. “We wanted to show that we’re not just people who publish games- we build games,” says Hamed with pride.

Other winners were selected in various categories, listed below:

The games were chosen by a panel of judges that included Arab game specialist media outlets like IGNMiddleEast, True-Gaming and Z-pad.net, as well as prominent game developers Radwan Kasmiya of FalafelGames and Rami Ismail of Vlambeer.

All games- some HTML 5, some built on Flash- will remain on the GameTako website for players to try.