Wamda interviewed Minister Sehanoui live on Twitter to answer the questions young entrepreneurs have about the center, in addition to entrepreneurship and innovation in Lebanon in general.  The interview addressed topics ranging from the new BDD to Lebanese infrastructure, from startup costs for entrepreneurs to the Lebanese education system.

Though many participants wanted to push the conversation deeper, the interview style didn’t accommodate for longer questions. Within the 140-character limit on Twitter, questions and answers were limited to short and quick tidbits, designed to keep the conversation moving and to allow as many questions as possible.

Some participants wanted to discuss previous internet issues with Ogero, especially over the internet blackout earlier this year. The conversation wasn’t meant to grill the Minister over internet issues – but rather to promote a discussion about the movement and facilitation of entrepreneurship in Lebanon.

As the interviewer, Wamda’s goal was to reveal BDD and to open up key topics regarding the entrepreneurship ecosystem in Lebanon, to create a broader discussion for participants to both continue on and offline. We enjoyed speaking with the Minister and look forward to future Twitter interviews with leaders across the region.

To view the full interview, click here. Check out some of the conversation’s highlights below.

In the first set of questions, Minister Sehnaoui discusses the gaps in Lebanon's startup ecosystem:

Later in the interview, Wamda asks the Minister to explain what characteristcs Lebanon has that position it to be a startup hub in the region: 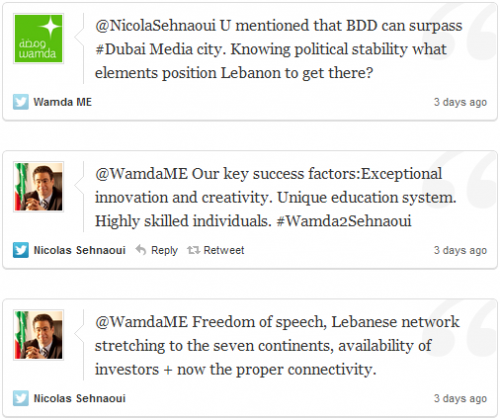 Wamda asks the Minister to explain his stance on internet censorship, which has been attempted in the region:

Wamda answers the Minister's question about the entrepreneur's "wish list" in Lebanon: