Yabila! is a mobile advertising platform serving as a daily guide for the latest offers, promotions, and new arrivals in MENA cities.

Yabila! enables consumers to shop smartly and makes their lives easier; it aggregates all local promotions (both online and offline) and houses them in one place, presenting a very different model than Groupon or Living Social. Some of the deals can even be purchased directly via the Yabila! Store.

Below is an interview with Abdur-Rahman El-Sayed (@AAElSayed), the Co-founder and Managing Director of Yabila!.

Yabila! enables consumers to shop smartly by providing them with a daily guide of the hottest deals, promotions, and new arrivals in their city. Consumers can stay up-to-date with their favorite brands via the Yabila! iPhone app, Android app, or on Yabila.com.

For brands and advertisers, Yabila! empowers them to effectively reach and communicate with their target audience via measurable “in the pocket” advertising channels. The Yabila! iPhone and Android app is our major driver of traffic, with more than 300,000 monthly active users in Kuwait only. We’ve recently expanded into Saudi and Qatar.

How is Yabila! different than daily deals and coupons model companies such as Groupon and Living Social?

It’s completely different, these companies depend on the group-buying concept. Yabila! is more like a convenient guide to discover new products and promotions.

For example, if someone wants to advertise a general 50% store discount or if Ford wants to advertise for their newly released car, this isn’t applicable in Groupon. However on Yabila!, they can run either a video or image ad campaign targeting their exact audience “in the pocket,” and measure the effectiveness of the campaign.

How did you get started?

There was no way to find the latest offers and promotions in Kuwait. So we decided to aggregate all of the promotions from both offline and online resources. We also realized that smartphone penetration was extremely high, especially for product research, that’s why we decided to focus primarily on mobile apps. We started the company in April 2010.

How has Yabila! changed since you started?

We spent 2 months just brainstorming the idea with my other co-founders Abdullah El-Sayed and Dr. Ammar Alkhateeb and then 6 months developing the core platform, mobile apps, and portal. During this period, we hired 4 employees to populate the platform with content and promotions. In December 2010, we launched the portal and then the iPhone app in March 2011. Within the first 3 months, our app saw 100,000 active downloads. 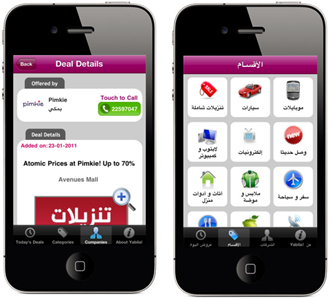 How did you fund your Startup?

We are self-funded, we weren’t lucky enough to find an investor in Kuwait with startup-funding experience that could structure the investment deal well. Time was flying and we wanted to execute, so we decided to fully fund the company ourselves.

What is your revenue model?

Yabila! Is based on a subscription model. We have more than 125 brands subscribed with different types of packages to run ads on our platform, including Mercedes-Benz, Starbucks, Zain, Turkish Airlines, and many others. We are also monetizing through our mobile commerce engine, Yabila! Store, which enables us to sell deals directly to consumers.

Where did you develop your technology? Do you outsource anything? And why?

Everything was developed in-house by our engineers.

Do you work full-time or part-time in Yabila!?

I work full-time, even prior to the launch of Yabila!. In a startup you need to be focused and fully execute, you cannot be “half engined”.

What are the biggest difficulties in establishing a startup in Kuwait?

Are there advantages to establishing a startup in Kuwait?

Yes, Kuwait has the highest average revenue per user (ARPU) for mobile services and games, in the GCC region. It also has one of the highest smartphone penetration rates in the region.

Who are your competitors?

What are Yabila!’s plans for the future?

Yabila! is currently doing very well in the Kuwaiti market. We recently soft launched in Saudi Arabia and Qatar. We are planning to expand more in Saudi and Qatar, and enter other lucrative markets such as Turkey, Egypt, UAE, Jordan, and Lebanon.

Do you have any advice for someone planning to start his/her own startup?