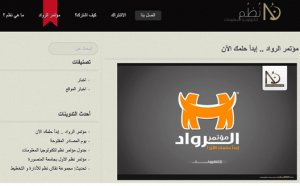 Over 120 members of Mansoura-based Nozom all agree on fostering the entrepreneurship culture in this small town, defying several obstacles especially its distance from the capital (more than 120 km), limiting media and other support.

But, did you know that there is indeed water and oxygen outside Cairo?

“Nozom was established to assert that there was oxygen and water outside the capital that would allow the establishment of real business communities.” That is how Mustapha al Husseini, founder and board member of Nozom summarized why he and his colleagues created the organization.

He adds that their non-profit organization aims to create a suitable atmosphere in the Nile Delta region for starting projects based on information technologies and aiming to enrich culture and the Arabic language.

Nozom provides workshops, training, and learning programs in different technical sciences, management, marketing, entrepreneurship through collaboration and expertise exchange among its members. It also strives to overcome the usual obstacles that entrepreneurs face such as providing workspaces, mentoring, and public relations help. 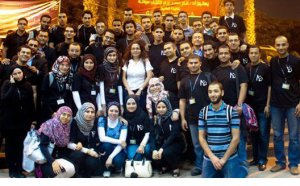 “After the revolution, seven founding members started Nozom when we all felt the hope and enthusiasm that rises during a revolution,” Husseini explains. Since it started, Nozom has managed to provide dozens of workshops and programs that contribute to generating jobs for some of its members. It also organized three conferences to promote entrepreneurship among the youth of al Mansoura University and hosted a number of important figures and entrepreneurs in the technology domain.

As for the challenges that face Nozom, al Husseini discusses the difficulty of convincing the technology brands – known to support entrepreneurs in Cairo - to support the organization and its upcoming plans. The initial startup costs were handled by its founders. Nozom’s future operating costs will be collected through membership fees. He added that the size of companies in Mansoura is too small to get media attention.

Facing these challenges, the Nozom team works to make the most of all available resources, optimizing the way their workplace operates. Nozom makes the most of its proximity to al Mansoura University, holding most of its events on campus grounds. In addition, Nozom has screened and established contacts with professionals and technicians who originate from Mansoura to provide support and guidance for its activities.

Mahmoud Eid, executive committee member of Nozom emphasized the role it is playing in channeling the energy of promising minds in Mansoura and its surrounding towns by avoiding ideas that would be either illegal or too traditional and wouldn’t add to a real revolution in the IT industry.

During the third weekend of October, the Mansoura Startup Weekend contest is taking place for the first time and Nozom is highly involved as a media sponsor and through the participation of some of its members in the planning of the event. The event will also include other sponsors and organizers.