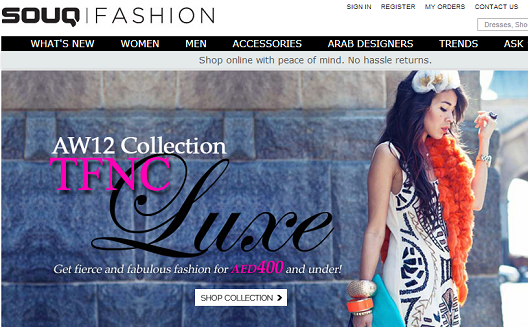 Middle East fashionistas rejoice! The launch of Souq Fashion in Dubai last week not only means more trendy brands hanging in our closets, but also, celebrity stylists at hand for all your fashion queries.

While the presence of Rob Zangardi and Mariel Haenn – stylists for Jennifer Lopez, Rihanna, Gwen Stefani, and Will Smith among others, and now advisors on Souq Fashion – at the launch party guaranteed headlines for the new venture, the launch of Souq Fashion spells big news for Souq, the Middle Eastern e-commerce giant.

Souq CEO Ronaldo Mouchawar says the idea for Souq Fashion was born out of the observation that fashion wasn’t getting enough traction on Souq, even though the site attracts 8 million visitors a month. “Fashion is a $30 billion industry in the region, but from the billions of dollars that are sold in fashion in the region, less than one percent is bought online here – whereas in the West, it ranges between 11 and 15 percent,” says Mouchawar.

“That’s why we’ve always looked at fashion,” he continues. “We get 8 million visitors on the site per month – that’s bigger than all of the malls in Dubai combined. So, we’ve gone through platform changes and improvements on Souq.com to accommodate Souq Fashion.”

The launch of Souq Fashion demonstrates an attempt to accelerate Souq’s business as rumors swirl about some potential new developments at parent company Jabbar Internet Group.

After putting together a regional team to operate Souq Fashion, Mouchawar says the new site will provide “front row fashion”, rather than the flash sales model of sites like Sukar, which Souq recently acquired.

“We have separate teams for Sukar and Souq Fashion, as a lot of the buying is very different,” explains Mouchawar. “We have affordable prices for things worn by celebrities, and advice from stylists.” The focus will be on ready-to-wear and accessory labels which have a strong celebrity following in both the US and the UK, including brands like DL1961, Paper Crown, For Love and Lemons, and Wildfox. Souq Fashion also has a specialized section for Arabic designers, including Dina JSR, Ronald Abdala, Contessa by Aly Fawaz, Abeer Al Suwaidi, and Dima Ayad.

Souq Fashion currently offers more than 80 designers, and caters to both men and women. Mouchawar says that Souq targets a largely male population, as its sales of electronics make up a big percentage of Souq revenue, but Souq Fashion will go after the women in the region.

As for potential competitors like Net-a-Porter and DIA-style, Mouchawar says Souq Fashion is doing things differently. “We’re trying to carve out our own unique position,” he says. “Net-a-porter is more from the designer side, while we’re trying to bring looks to people in the region for an affordable price – they are designers that are very trendy, but not as expensive. We’re focused on what celebrities are wearing and what customers are wearing.”

Souq and its latest venture Souq Fashion currently operate in a very strong market for Souq, while in Egypt, the e-commerce site remains ahead of the competition. “We’re the leading site in all of these markets, period,” says Mouchawar.