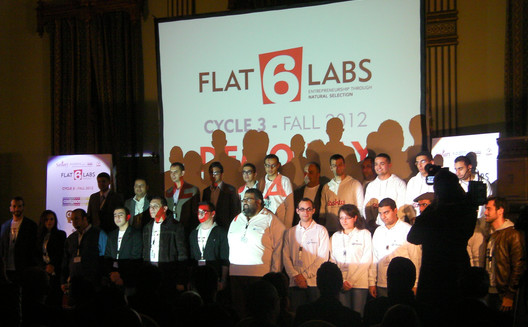 Flat6Labs, the Cairo based accelerator, held its 4th Demo Day event, dubbed “Cycle 3 Fall 2013”, this week at the Cairo Marriott, showing off the latest batch of graduating start-ups.

This was the first time the event was held at the same venue as the previous event, so we can do a like-for-like comparison for the first time as well.  I’m happy to say the food was slightly better than last time, and perhaps that in itself mirrors the fact that Flat6Labs has now entered a phase where we’ll see incremental improvements and changes, as opposed to the big changes we’d seen before.

The format was the same, with the 6 start-ups exhibiting at their own stands, fielding queries and questions from the assembled guests and media.  What was new this time was that previous graduates were volunteering to help with the organisation.  Two members of the Eshtery team told me that they were more than happy to volunteer to pay back for all the help they still receive from the Flat6Labs team. Event management is always a good learning experience as well, so it was a win-win situation.

After the exhibition we again saw the presentations from the main stage, where each of the startups presented their concept and its investment opportunity. The new change here was that 3 startup founders from previous Flat6Lab cycles gave short speeches about life during and after graudation, and then a short, reasonably well-made documentary video gave us a glimpse of life inside the accelerator. It was useful to remember that this event is as much a showcase of investment as it is a celebration of achievement.

The presentations themselves were good on the whole. The standout team was PushBots, a cloud-based platform-agnostic push notification service that has real potential to go global. CEO Amr Sobhy is also an assured speaker, coming across as a mix between an eccentric scientist and a creative businessman. No prizes for guessing which deceased Apple icon he’s modelled his style on.

Style was also at the forefront at Cirqy, a social marketplace for arts and apparel that leans towards high-end design products. The biggest obstacle in this space is that high-end shoppers typically like to see these products in person, especially jewellery, but the site’s fresh, modern design will surely appeal to their regional target market.

Taskty offers an online task marketplace, although we’ll have to see whether they’ll be able to get enough committed individuals to join to make the service function smoothly (as the Do-It-Yourself culture is yet to grab hold in the region). The market for project-based work is admittedly massive in the region, however.

Castpace delivered the first regional platform that connects independent filmmakers. They are sure to get business, not least from foreign filmmakers looking to hire local crews, as there’s no easy way of doing that now in Egypt.

Rawy (Narrator) delivers interactive Arabic content for children on mobile and tablet, while offering a platform for independent content developers. The market for Arabic content is getting bigger by the day and is mostly untapped, especially for children’s literature, but the content will have to be up to global standards to compete with English language titles.

Ahmed El-Alfi, the chairman of Sawari Ventures that owns Flat6Labs, confirmed in his speech that they are looking to expand their reach with new regional Flat6 accelerators elsewhere in Egypt and also in other Arab countries.  While I commend the vision and optimism, I also think the ecosystem would be just as well served by beefing up the early stage and series A investment sector, as that’s the area that’s the biggest current investment obstacle that a growing startup faces- finding the next post-seed round in that can take them to the next level.

In the meantime, I did make one suggestion to Flat6 CEO Ramez: how about an after-party after the next well-executed demo day!