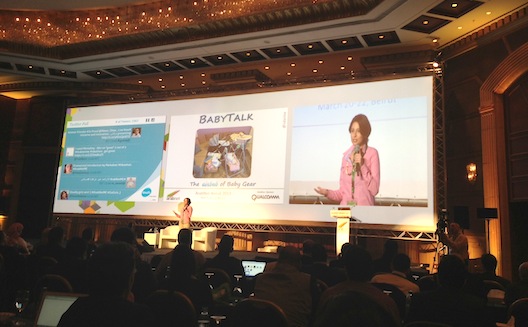 Despite the conflict next door, Arabnet Beirut managed to rally a good crowd this year for new debates on the state of tech entrepreneurship in the Arab world.

As it focused on new sectors- food & beverage, mobile music, offline companies going online, social impact- as well as some old favorites- gaming, social media, and social entrepreneurship, the conference came into its own. It was smaller than it was last year, but a few factors benchmarked the evolution of the ecosystem in the Middle East.

Despite the conference being more Levant-focused this year, having entrepreneurs from Turkey and several from Saudi was the new norm. The startup ideas were bigger and better. This year’s Ideathon winner, Darine Sabbagh, proposed Baby Talk, an AirBnb-like website for baby items that I hope we see launch in the next year.

The Startup Demo winner, Wally, a personal finance app that looks easy to use (the UX is also designed by Maya Zankoul) already has over 10,000 downloads and 8,000 active accounts, and has been listed as the top finance app in 6 countries. It arrived out of nowhere to launch with a bang at Arabnet.

But those who really won at Arabnet were the attendees that stayed for the evening program. The red velvet cake balls from Gustav, the fish and chips from St. Elmo’s, and the steak from Couqley, backed by a jazz quartet at Arabnet’s “Taste of Beirut” event made very delicious, very convincing arguments for entrepreneurship. Offering culinary smorgasboard, Arabnet truly arrived. Let's hope for more of the same concept in Dubai.

The gaming and mobile music panels on the second day were two of the hottest panels (for more on these, see Features Editor Glen's wrap-up of the gaming panel and our Operations Guru Fares's conclusions about how mobile music services can win users in the Arab world). But the other panels also incited good debates.

Here are 5 questions we found ourselves asking during the panels.

1. Is 3 months enough for acceleration?

I asked this question in the opening panel, titled “The Entrepreneurship Ecosystem- Measuring Our Success,” in which panelists Hala Fadel, Usama Fayyad, Khaled Ismail, Dany Farha, and Tim Rea spoke about the very real challenges that the ecosystem currently faces.

“Entrepreneurial education is very far behind,” Khaled Ismail, the Chairman at Endeavor Egypt, pointed out. “I’ve seen around 3,000 to 4,000 startups being started, but I haven’t seen 300 to 400 mentors to help these startups.”

That’s something we’re working to scale with Mix n’ Mentor. But Khaled’s point led to another question that’s been on my mind lately: are we in danger of creating a dumping ground for startups that graduate from accelerators but can’t find follow-on funding? If entrepreneurs don’t have the education they need going in, is it the job of accelerators to bridge that gap with more training?

Usama Fayyad of accelerator Oasis500, which offers startups a three month bootcamp and around $15,000 in seed funding in exchange for around a 10% equity stake, says no. “If entrepreneurs haven’t found an idea within 3-6 months, a year won’t help.”

Ismail disagrees. “There are very rare cases where people actually have an idea that makes sense at the very early stages.” Citing the fact that he took two years to make his first startup viable, he pointed to a need for more milestones.

In the food delivery panel, Turkish giant Yemek Sepeti, which recently secured $44 million from General Atlantic, faced off against Delivery Hero, a German company that operates in 12 countries, and Otlob, Egypt’s powerhouse which claims to list 95% of the big restaurants in Egypt.

As our Community Manager Stephanie noted, the panelists agreed that online delivery in the Middle East suffers from three major challenges: convincing restaurants (clients) to sell online, selling via cash on delivery, and creating a workable addressing system.

Walid El Saadany of Otlob revealed that his company gets around the issue of addressing simply by hiring local drivers who understand the landmarks. That might not be an agile system, but as food delivery companies grow, they’ll have to innovate in this space. It will be interesting to see if they would adopt an addressing platform like Addy, or if their solution to that issue can scale across other sectors.

3. What does it take for a successful offline brand to transact online?

In the panel on case studies in E-Retail, Ziad Nassif of local flower shop Exotica pointed to a central theme, Stephanie and our Arabic Editor Reine report: for most offline businesses that go online in Lebanon at least, an online presence is more of a marketing tool and channel for customer interaction than an outlet for transaction.

It’s known that sites like Exotica and bookstore Antoine Online do not transact heavily in Lebanon thus far, as customers simply prefer to shop offline. Websites are simply a great marketing tool for expanding into other markets, panelists said, especially in cases where transacting locally is more difficult (a company like Exotica would have to guarantee the availability of fresh flowers locally).

Yet as trust of online payment improves (a recurrent theme), the hope is that companies will be able to become more successful at securing transactions.

4. How can advertisers innovate in the Arab world?

In the “Digital Innovation in Advertising” panel, panelists amusingly had a hard time answering this question at first.

By the end, several answers were thrown out. The future of advertising is push MMS. In-app and in-game advertising. Mobile ads. Near field communication. Augmented reality.

Ads are moving towards a focus on transactions, said Ameen Malhas of branding company Wolff Olins, meaning that more companies are focusing on cost per action ad models and models that track transactions than cost per impression ad models.

Also, taking a multichannel approach to going social is crucial, said Boya Balgoun of Mindshare MENA. Today, you can have the same impact that you used to have buying a banner ad on a Yahoo! Homepage, by launching a creative campaign across networks, he pointed out. While clients often just think about getting on to Facebook (which is now sourcing transaction data to make its targeted ads even smarter), it’s important to look across networks like Instagram and Vine.

It’s also important to pay attention to local culture. In another fun and controversial panel, Karim Khalifa of Egyptian agency Digital Republic presented the company’s “AXE Wingman” campaign, which won two awards at the Dubai Lynx this year. In the Gulf market, rather than rely on AXE’s typical guarantee of a woman’s attention, “AXE Wingman” asked fans to send in notes about that “special someone” in their lives, and then recorded live songs asking that someone to be the fan’s Valentine.

- Keep it simple.
- Make fans feel like they’re part of a community.
- Give fans a competition.
- Make it fun and social.

Moderator Con O’Donnell cut to the chase: “Can you make [a lot] of money in social  entrepreneurship?”

Ultimately, said Sherif, CSR is dead. Business and society can’t be separated; in the future, all businesses will invest in society. This artificial divide between socially-focused businesses that are perceived as somehow less capitalist, and the cutthroat ones that are stereotyped as lucrative, will evaporate.

Do you agree? How can social ventures overcome this stereotype?