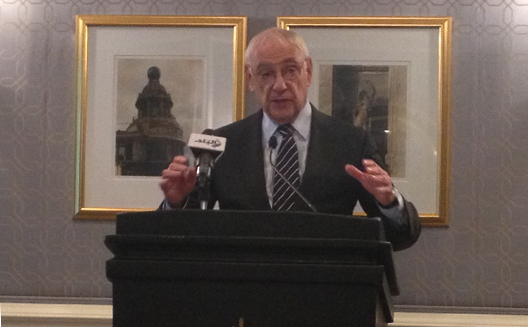 Despite the political instability wracking Egypt today, startups have a new source of potential support. But will they take funding from the U.S. government?

In an effort to boost Egypt's ailing economy, the Egyptian-American Enterprise Fund recently launched to invest in Egyptian small and medium-sized businesses, which are known to be the backbone of economic growth worldwide.

A public-private partnership involving key members of the American University of Cairo, the Middle East Institute for Law and Development, and investment houses Morgan Stanley and Goldman Sachs, the fund will offer backing from the U.S. Treasury Department, in return for equity, with a time limit of ten years; after that, the assets of the Fund will be dissolved and any profits will be split between the Egyptian and American governments, to be reinvested in developmental projects.

The fund will launch with $60 million, and will add an additional $60 million over the next few months, in hopes of reaching $300 million in three years, said James Harmon, Chairman of the Fund’s Board of Directors. As more countries from Asia and Africa join, the fund expects to eventually exceed $1 billion.

It comes at a crucial time, just as Egypt is struggling to approve the conditions of the IMF's $4.8 billion loan. As analysts speculate that Egypt doesn't need the IMF, Harmon wrote a pleading letter to the Egyptian government noting that political stability leads to economic stability, which in turn creates job opportunities and encourages foreign investment; can the country agree to support SMEs?

The U.S.'s desire to get involved in funding Egyptian startups is hardly a new idea; John Kerry first proposed the idea to the U.S. Congress two years ago. Since then, the idea has overcome fierce opposition, driven by fear of political instaibility in Egypt, to gain Congressional approval and support from the Egyptian government.

To ensure sustainability beyond the involvement of the U.S., the fund’s Board of Directors have involved several leading figures in Egypt, including Sherif Kamel, Dean of the School of Business at the American University in Cairo (AUC), Hani Sari-El Din, head of the Middle East Institute for Law and Development (MIDL), and Neveen El-Tahri, Regional Director of Delta Shield for Investments.

Harmon, along with Jim Owens, the Chairman of the Board of Directors of Caterpillar Inc., join as Americans, and to round out the board, three Egyptian-Americans have joined: Haytham Al-Nather, Head of TA Stock Investment Corporation, Tarek Abdul Majid, Chairman of the international investment banking sector at Morgan Stanley, and Dina Powell, President of the Goldman Sachs Foundation.

Involving these powerful local leaders demonstrates the longevity of the project; however, Harmon knows that effecting change won't be easy; he doesn't expect to see results for another 3 to 5 years at the very least. “We are lucky if we live long enough to witness the exciting results [of the Fund],” he said soberly.

The Egyptian-American Enterprise Fund has called on Arab and Asian nations to join, to build a broad base diversified beyond the U.S. Thus far, it's been successful; one Arab country has expressed a willingness to match amounts funded by U.S., over the next three years.

In a capital-rich region, the goal is also to provide support beyond funding and loans. “We are also concerned with providing services, trainings, counseling, and advice for business development in Egypt,” Harmon said. While the fund will be sector-agnostic, preference will be given to projects in health, agriculture, and recycling sectors.

Ten years from now, when the assets of the Fund are dissolved according to the stipulations of a bill passed by the U.S. Congress, the Egyptian and American governments are expected to split the profits in half, provided the Egyptian share is allocated towards new developmental projects.

Ultimately, this fund is not just an investment vehicle; it's also a testing ground. The U.S. Treasury Department also plans on building a similar supporting fund in Tunisia, says Harmon.

So if startups are interested in funding from the U.S., there will be plenty more to go around. For more on the expected impact of the fund, read the next article on this topic.