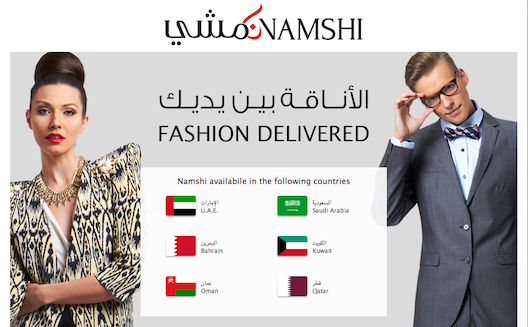 The funding will be used to “upgrade operations in the Gulf and manage our own warehousing,” says co-founder Hosam Arab. Essentially, the Zappos clone will be moving out of Aramex's facilities, stocking in a new warehouse outside of Dubai’s Free Zone. “Yes, we’ll be paying taxes, but our rationale is that we want to better serve our customers,” says Arab.

After launching its own Last Mile Delivery in the UAE, and now handling its own warehousing, Namshi now hopes to gain a competitive edge by offering Same and Next Day delivery; thus far in the UAE, only electronics stores like JadoPado guarantee 24 hour turnaround.

The company is also reducing return rates (which can reach up to 25% in Saudi Arabia) by offering customers the option of returning items on the spot if they aren’t satisfied. That won’t set them apart, however; it’s a trick they might have learned from flash sales site MarkaVIP, which starting offering the same service in September.

What the company won’t be spending more on is marketing, says Arab. Its plans to warehouse in Saudi are also on hold.

But new warehousing in Dubai alone doesn’t cost $13 million; the question remains as to whether is Namshi is burning cash quickly enough to have evaporated its previous investment of $20 million in 8 months, or whether Rocket is simply pouring cash into its e-commerce properties to suit the terms of its overarching multi-million dollar deal with Summit Partners.

This round of investment comes only four months after Summit Partners’ previous investment in Namshi in January (which TechCrunch pegs at a miniscule $1 million), after PPR’s December injection of $13 million into Bigfoot I, the Rocket holding company that controls Namshi, and the $20 million that J.P. Morgan and Blakeney Management invested last September; that’s $34 million in investment to date (plus perks from PPR) since the company’s launch in late 2011.

In contrast, flash sales site MarkaVIP has taken on about $18 million in investment since its launch in 2010, while Souq, which launched in 2005, secured funding from Nasper’s valued at $40 million last October.

Summit Partners has also showered $26 million on Jumia, the Amazon clone that operates in Nigeria, Morocco, and Egypt, in March, and similar amounts in Latin America’s Linio and Southeast Asia’s Lazada, investments all potentially tied to its new $520 million credit fund for fast-growing middle-market companies.

Perhaps Summit is hoping that this round can take these cash-intensive businesses to profitability, but it won't be a cakewalk in this difficult early market, where Rocket has already closed Mizado (abruptly enough that frustrated employees emailed Wamda about the difficulties they faced losing their jobs while still operating under a tourist visa).

Rumors at the time cited overspending on expensive hires, but the decision may have been a result of Rocket’s strategic refocusing on Africa.

Arab doesn’t see Namshi facing anything similar, nor does he see similar frustrations facing his team; although his co-founders Muhammed Mekki and Louis Lebbos left this winter to co-found education portal Astrolabs, “we're all very happy with where this has gone,” he says. New co-founders Faraz Khalid and Hisham Zarka, who comes directly from Rocket’s Middle East office, form a “strong team at the helm.”

When it comes to the notorious slave-driver ethics of the Samwer brother, Rocket's co-founders, “our employees are very shielded from Rocket pressures,” he says. “Those pressures are something that we deal with as founders of the business, and over the past few months, we've felt very little of that.”

Maybe Namshi has escaped Samwer wrath because it's prudently toning down marketing and keeping some of the spoon-fed cash for a rainy day. Or maybe it’s burning through cash like kindling and Rocket will source new deals when these run out. How long will this round last?