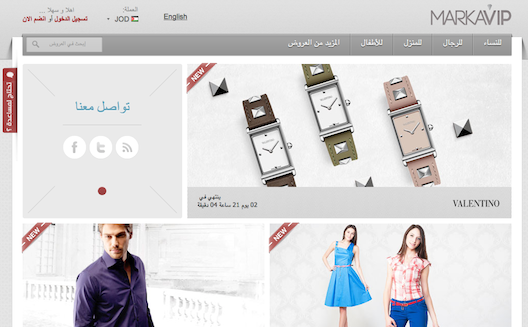 Less than two years after its launch in 2010, MarkaVIP has announced today that it has now hit two million registered users.

At the time, when the Series B round closed, MarkaVIP founder Ahmad Khatib explained the company’s intent to streamline its processes, saying, “We actively pursued this funding to focus on decreasing product delivery lead times and improve quality across the board."

In an interview at Arabnet, also in April, he emphasized that gaining customer trust and enhancing awareness about credit card use are critical for growth in a market hungry for cash on delivery.

Now it’s clear that the company has used the investment to execute on this front. ““We have streamlined our shopping, payment and shipping infrastructure across the disparate GCC to provide an unprecedented user experience, and we pride ourselves on the breadth and superior quality of our products and our exceptional customer service,” says Khatib.

All eyes are on the company as it seems to be, in a sense, the current canary in the coalmine when it comes to assessing the e-commerce market in the Middle East and North Africa. Forget the impact of LivingSocial's move- as a homegrown enterprise, MarkaVIP’s quick success more broadly inspires other young e-commece startups, especially as it seems more relatable than Jabbar's Sukar, which has merged with large online retailer Souq in hopes of faster expansion.

MarkaVIP has clearly blazed a path towards large numbers. Yet those watching may feel a need to look under the rug to understand 1) is the company profitable? And 2) have they found a way to minimize returns on cash on delivery (COD) orders, the problem that plagues all e-commerce companies in the region? (Return rates are known to reach up to 25% in some markets, with duties levied at up to 40% in some cases; it’s a lethal combination as companies eat the cost of shipping, duties, and return on a COD order).

While MarkaVIP won’t comment directly on profitability, “we make a profit off of each order that we deliver,” says Khatib, who noted that the company made $6 million in revenue in the month of April. “It’s not like the Amazon model where you only make a 5% margin.”

Their average member buys up to 9 or 10 times per year, and over 60% of customers are repeat buyers. In the UAE, the average order value is $150.

Returns are also improving for MarkaVIP since it has implemented a flexible in-house logistics solution for 60% of its regional orders. “When you’re able to deliver directly to the customer, you’re able to schedule much better,” says Khatib. “We’re able to schedule the delivery based on the time and convenience that fits the customer. We can deliver on Fridays, weekends, or we can take an address from you on the same day and deliver to your mother’s house or wherever you need.”

For those that spend “thousands of dollars” on the site, the VIP service is even more accommodating; MarkaVIP’s delivery service will wait outside a customer’s home while they try on the clothes and confirm the sale- “this way, VIP customers can avoid the hassle of returns. If you don’t like it, you can give it back right away.”

This in-house delivery service is fully operational in the UAE, Jordan, and Lebanon, and set to be active in Saudi soon. Several warehouses in Saudi are on target to be operational by early 2013, a factor that will also cut costs for the company’s business in the region’s biggest consumer market.