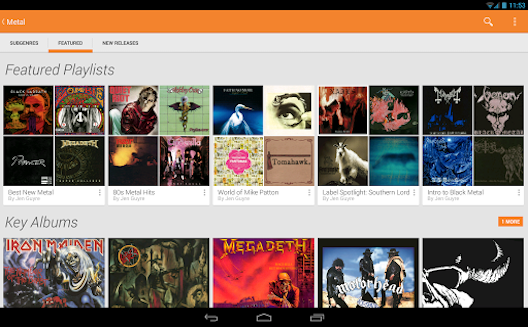 On May 16, 2013, during its I/O developer conference, Google made a major, albeit expected announcement: the launch of its own subscription-based music streaming service. This past Wednesday, the internet giant launched Google Play Music All Access, which is available after a 30-day free trial for $9.99 a month in the U.S, a similar price to its direct competitor, Spotify Premium.

Following the model made popular by Spotify and others, Google Play Music will offer users the ability to search, organize songs in playlists, and stream music on their web browser or Android device. Google is also promising its future users a large library to stream from, thanks to licensing deals with many music companies, including Sony, Universal and Warner.

While no dates have been communicated regarding the service's availability in the Middle East, this move will no doubt impact the growing local market, so we asked local players what they thought of it.

Abed Agha, the founder of VineLab, a Lebanese digital entertainment agency, sees it as a confirmation that streaming is here to stay. “It’s an interesting move when a tech giant embraces the all access streaming model. I wouldn't go as far as saying this move is a validation for the model, but it definitely pushes it forward as the business model of music monetization.”

Mathieu Molinero, International Area Manager at Deezer, the first major International streaming service to enter the Arab market, concurs. “It endorses that streaming music is the future. We expect that big conglomerates, such as Google or YouTube, will attempt to enter the music streaming or subscription market at some point as there’s a strong demand from people to listen to music in this way.”

Molinero is not frightened by Google's move, as Deezer is rolling out a partnership that will allow Google+ users to sign in on Deezer, while Google's search engine will reference trending tracks on Deezer, in realtime. He also reminded us of how well established they are – Deezer has 26 million members in 182 countries.

One crucial point of differentiation for Deezer is that its 55 music editors worldwide are making hundreds of recommendations every week, he says. “At Deezer, the music is handpicked by fans, not an algorithm.” It’s interesting to note that Deezer may have a longer experience in recommending music, but all of its competitors, Google included, are also claiming they recommend music manually. Google speaks of a “expert music team".

Agha of VineLab, for one, thinks that Google is actually using Play Music to push Android use: “It's still a basic product especially as it serves Android and web users only at this time and is limited to US access. I think it's more of a user retention strategy to keep pushing Android further at this stage,” he explains.

Elie Habib, from Anghami, the Lebanese-based music streaming startup, also doesn't bat an eye when asked about Google Play Music. He repeats what he’s been saying all along: the real competion is not other streaming services, it’s piracy.

With that in mind, the Lebanese entrepreneur seems to welcome Google Play Music, as this new player will participate in educating the market and therefore increasing the number of possible users for Anghami. “One of the toughest thing we found while growing to 1.4 million users, is education. Many users don't realize what is a streaming service and how it replaces the old concepts of downloading. With Google, and eventually Apple getting into the fray and communicating messages around streaming, we really believe this will get more users appreciating what Anghami offers.”

That being said, even though the co-founder acknowledges the quality of Google’s streaming, he doesn’t believe that a subscription-only service is a fit for the Arab market nor any mass-market. “Google All Access isn't into freemium, and simply is just a paid service at $10/month. We don't believe this is that targeted towards mass market and is far from being any kind of competition in the region."

Patrick Chassany, the founder of Yala Music, a Morroco-based music download and streaming platform focused on Arab content, disagrees. If Google is indeed competing directly with Spotify, Deezer and Anghami, it won't be a direct competitor of Yala, he says, as the French platform has a different business model, which offers downloads as well as free streaming that involves advertising.

What do you think? Is Google going to kill the pre-existing international and local players, or is it going to help them educate markets and convince users to stream music?