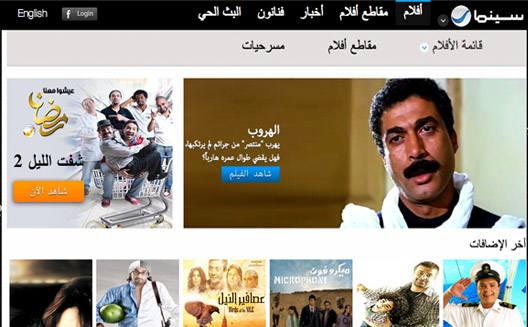 The massive popularity of online video streaming in the Arab world is beginning to attract the attention of big companies looking for a piece of the action. A newly-launched platform from Rotana Media Group – with a content library befitting its conglomerate size – may well change Video on Demand in the Middle East as we know it.

This month, Rotana, which manages a large group of radio and television channels, launched a new internet platform for users in the Arab world to watch free Arabic-language video content. Their new “Rotana Cinema” offers 1,000 hours of entertainment content including movies, plays, and television series.

The vice president of the group, Hassan Suleiman, cites increasing regional “internet consumption habits” as the principle reason for Rotana’s decision to “build an internet platform to complete our television platform [to better serve] all our viewers and clients.”

But Rotana’s move could threaten smaller-scale startups, largely because it offers its content for free. Other platforms like Cinemoz and Istikana already exist, but the main difference between the three platforms is in content. Cinemoz, a Lebanese platform launched in the summer of 2011, is known for offering short movies, a category often neglected in the Arab entertainment scene. By contrast, Istikana mainly focuses on full television shows. Premium content on both Cinemoz and Istikana operates on a subscription basis.

Rotana’s content is free, something Andreas Roell, CEO of EGM Worldwide, Rotana’s digital partner feels in non-negotiatible. “We think that Arab TV and movie lovers have the right to enjoy their cultural and entertainment heritage for free; the model relies on advertiser support,” he says.

“This is just the first stage,” says Suleiman. “We will launch the second one in August with the largest online library for Arabic videos and movies ever.” Roell confirms that they will soon launch Rotana Cinema for mobile, tablet, and Smart TV to offer the same experience across platforms.

A brief test drive of Rotana Cinema went smoothly: the archive of Rotana Media Group includes a lot of movies, both new and old, the quality is good, and the platform works well. While this new release may not bode well smaller Video on Demand player, it appears to be an improvement for the regional media consumer.

What do you think? Can video streaming startups compete larger and more-established media companies? Let us know in the comments section below.