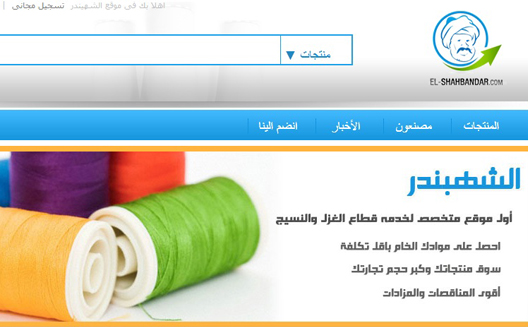 Before political turmoil was making headlines, Egypt was well-known for its cotton.

Yet these days, the industry that set a global standard for luxury is facing several challenges; it's been overshadowed in recent decades by the burgeoning digital technology sector. The emergence of quality, low-cost cotton substitutes in other parts of the world has made competition more difficult, and a lack of government support for small producers has left them vulnerable to the flux in the global economy.

Now two siblings, Fatima and Mahmoud El-Esnawi, are looking to revitalize Egyptian textiles by bringing the industry online. While their startup hasn't launched yet, last month the siblings were accepted for incubation at the AUC Venture Lab, for their bright and ambitious idea.

El-Shahbandar, which means “big trader” in Turkish, will be an online marketplace that helps connect cotton buyers and suppliers, in order to help textile entrepreneurs find raw materials at the lowest possible cost, and sell their goods in Egypt and around the world.

On a day to day basis, says Fatima, merchants find it difficult to obtain raw materials for reasonable prices, because they’re not able to shop around for suppliers. Suppliers, in turn, inflate their prices, knowing the buyer can’t easily find a cheaper alternative.

El-Shahbandar will eliminate this problem, she says, by allowing buyers to state their requirements, while registered suppliers reply with competing offers. The buyer then chooses the best deal.

By also functioning as a social network of sorts, helping textile entrepreneurs to connect with each other, the site is also designed to help business owners find qualified workers, the right machinery, and opportunities for networking, partnership, and growth.

To maximize the opportunity for connection, the site will target three types of textile entrepreneurs: those who represent factories and big suppliers worldwide, a second tier whose average company valuation does not exceed one million Egyptian pounds (around US $150,000), and a third level of early founders who general have few machines and live on what they produce.

It’s an ambitious project, but the El-Esnawi siblings are looking to emulate a model pioneered by Alibaba, the B2B e-commerce company that connects manufacturers to international and domestic suppliers in China. The El-Shahbandar founders hope to turn a profit from ad sales to banks and other entities who might wish to support small businesses, although it can be much harder to monetize with advertising in the Arab world due to the low cost of ads.

For now, the El-Esnawis are focusing on collecting data from factories registered in the Industrial Modernization Center, and they've coordinated with several industrial schools, like Mubarak Cool, to benefit from the expertise of alumnae. Attracting advertisers, suppliers, and even tech-savvy textile workers to sign up to the site is the next goal as they begin to build the project.

By aspiring to build the Alibaba of Egypt, these two young siblings are turning tech startups back towards supporting Egypt's older industries, a move that could help stabilize Egypt's economy if it takes off.