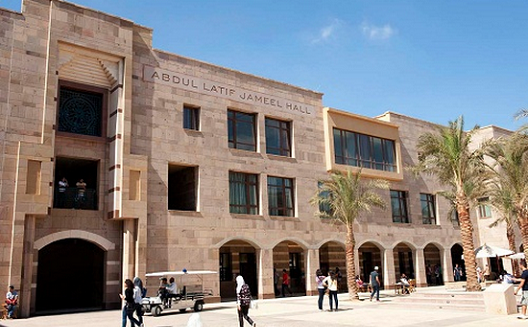 “In Egypt, we need to create 800,000 jobs every year, but you have to start somewhere,” says Dr. Sherif Kamel, Dean of the American University of Cairo Business School upon the launch of AUC's new on-campus incubator, the AUC Venture Lab, hosted by the university’s Entrepreneurship and Innovation Program (EIP).

“With a population increase of almost 2 million people per year, and 60% of the population under 25 years old, we have a serious need," he adds. "To be very honest, Egypt probably needs 100 incubators.”

But Kamel is optimistic that even a small step forward will get the ball rolling to help entrepreneurs and innovators to boost the Egyptian economy. “If we have a couple of success stories here, it will probably lead to more and more successful projects,” he says. “I truly believe that the future of a strong country is in a very competitive private sector.”

AUC’s incubator will be initially fueled by the startups that are competing in the recent Venture Lab Challenge. Applicants from across Egypt have been narrowed down to a select few who are currently going through a series of business training classes at AUC before the final 5-6 startups are chosen for incubation and given a small need-based grant to get started.

Unlike many of the region's accelerators, including Cairo's Flat6Labs and Alexandria's Tahrir2, the AUC V-lab is sector-agnostic and doesn't take equity in any of their startups; most of the applications they have received are tech-enabled startups, focused on building new mobile apps, renewable energy solutions, and retail platforms.

"You can find the best business owner in a psychology department, or history, or physics, or business. We look at this as an interdisciplinary ecosystem that serves everybody,” says Kamel.

“The great thing about having an incubator on campus is that startups can access all of AUC's assets,” says Rawiah Abdallah, a consultant on the project. These benefits include access to mentorship by professors, AUC’s extensive alumni network, academic resources and facilities, and, perhaps most useful, students to provide early market validation, differentiating the AUC V-lab from other incubators in the region.

The hope is that students will benefit from the incubator’s presence on campus as well. “You cannot really teach entrepreneurship in the classroom. You can’t just go and attend ‘Intro to Entrepreneurship’ and then you’re an entrepreneur,” adds Kamel. Besides recently introducing a new entrepreneurship minor and launching the AUC Business Review, a quarterly business journal with student contributions and case studies, students can also sign up for a consultancy course allowing them to sit in on mentorship sessions and sales pitches at the incubator.

Is a year's worth of incubation a good idea?

With a three month acceleration period for all their startups, AUC also offers incubated companies the option to stay for up to a year with periodic evaluations based on predetermined milestones. It may be an important addition to an ecosystem that traditionally sees only three month incubation before graduation, but opinions are mixed.

Some argue, like Usama Fayyad of Oasis500 at ArabNet Beirut, that a strict three or six month period is important to motivate startups to work diligently to have a presentable product by demo day; teams could drag their feet when offered a full year of incubation.

But several participants at this year’s Mix N’ Mentor Cairo expressed frustration with incubation programs that only give startups three months to find their footing, sometimes leaving them stranded when they graduate, especially when the burden of business education is on the incubator in less active ecosystems.

AUC V-lab seems to be taking a middle road based on constant check-ins and regimented benchmarks.

“We reviewed several very successful incubators in the U.S. as well as in emerging markets such as India and Malaysia and we put together a best-fit model that could potentially work for Egypt,” says project consultant Sherif Shabana.

While university incubators are popping up across the U.S. and the UK, AUC’s program seems to be the first such incubator in the Arab world. Stanford’s non-profit StartX, which has seen seven graduates acquired since its inception in 2010, as well as Princeton’s new eLab, support only their own university students. The AUC V-lab, on the other hand, prides itself on being open to entrepreneurs from across Egypt. StartX, like Cairo-based incubator Flat6Labs, only offers three months of incubation while eLab will offer ten weeks. Flat6Labs has actually worked closely with EIP, now helping the AUC V-lab team as they set up the new program.

With several different models on which to base their operations, the key here is finding a strategy that is right for Egypt. “Everybody should play a part in complementing the others, and our part has been as an educational partner,” says Kamel. Indeed, collaboration between the private sector and academia can have a powerful impact on the ecosystem, uniting expertise, funding, and alumni networks with innovative ideas.

The AUC V-lab has adopted best practices from global university and private incubators alike, but the team is forging ahead with their own formula. A longer incubation option, welcoming applications from across the country, and two startup competitions a year are all elements that the Business School has chosen in order to maximize its ability to support new job creation in Egypt.

The team is iterating as they go, now looking to raise funding and determine an effective governance structure, while hiring a full-time incubator team in the next six months.

“The fact that this is an open space, and nobody has done it this way before, gives us the opportunity to pioneer in the space. But the challenge is that there are no established practices to tell you what works and what doesn't, we’re really experimenting,” explains Dr. Ayman Ismail, EIP's Academic Director. "It's a new territory."