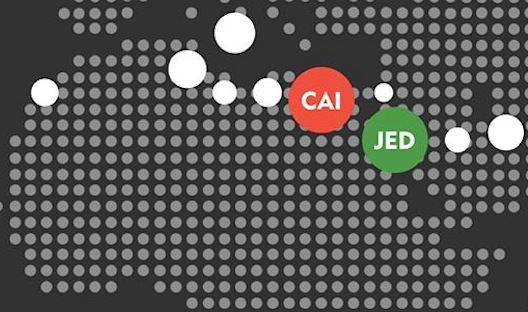 Accelerators in the Arab world are all the rage lately. For every one that has shut down since we last listed the Top 10 Accelerators in the Middle East and North Africa two years ago, another has sprung up in its place, Palestine’s Fast Forward, Gaza Sky Geeks, Dubai’s in5, Abu Dhabi’s logistics-focused Turn8 among them.

The list will likely continue to grow this year; demand from startups is building, and, when it comes to teaching startups what they need to know, stakeholders support accelerators as a quicker fix than education reform.

What is an accelerator again, exactly? It’s been called an alternative to an MBA, typically a fast-paced three-month program designed to bring a startup to market by offering mentorship, a workspace, technology, and seed capital, all in exchange for an equity stake.

By setting a gold standard, Y Combinator has inspired an explosion of similar accelerators around the globe. Yet most haven’t achieved near its success.

Of course in emerging markets like the Arab world, acceleration is a different ballgame.

Here, most accelerators tend to invest more and take a higher equity stake than Y Combinator does, offering valuations more in line with an emerging economy (although Y Combinator’s US $14,000 for 6% equity remains at the low end globally).

Today, that trend is building; as accelerator teams realize just how hard it is to keep startups afloat after graduation, they're further increasing funding amounts and offering longer incubation times.

Tenmou in Bahrain sits at the high end of the spectrum, offering startups around US $50,000 to US $80,000 in exchange for a 20% to 40% stake. It also incubates startups for over 6 months, or for “as long as they need,” if I recall founder Hasan Haider correctly.

Now, Flat6Labs, Egypt’s biggest accelerator, launched in 2011 by by Sawari Ventures, is also pivoting debuting a new model, one its founders think will succeed in various markets as it goes regional this year. Flat6 is now:

It might be early to assess Flat6Labs' relative success or failure, but the accelerator has graduated several companies that are going places, most notably Instabug, which just chosen as a finalist in The Next Web's USA Mobile Rally. Other interesting graduates include Taskty, a TaskRabbit-style portal, GoEjaza, a trip review site for the Arab world, and Nafham, a learning management portal set to go global.

The vision is to build a truly regional network that also leverages Flat6’s membership in the Global Accelerator Network, says Mohamed: “Think of the countless opportunities that come from an entrepreneur from Egypt getting advice from an mentor in Saudi, launching in Dubai, having a team member in Tunisia, and a business contact in Turkey.”

Starting on Monday, September 8th, the Cairene accelerator will test the new bootcamp in Jeddah, where the majority of its applications come from “Saudi entrepreneurs who want to quit their jobs and are dying to start a startup.”

If successful, its model will, no doubt, encourage other accelerators to enter/overrun the Saudi market. Yet its experimentation may also help other accelerators find a sweet spot where the seed funding and equity stake deal is good enough to help startups out the door but not high enough to make follow-on funding impossible.

[Disclosure: Wamda Capital has partnerships with both Oasis500 andFlat6Labs].