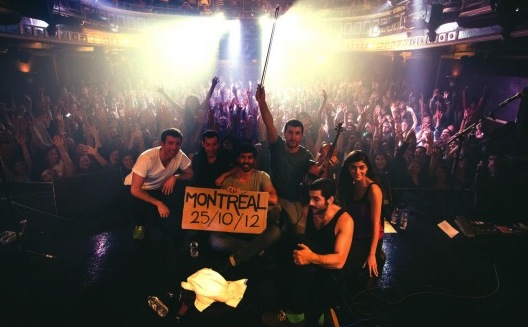 Last month, 543 fans of the Lebanese indie rock band Mashrou' Leila gave a combined total of over $66,000 USD to fund the release of the band’s third album, Raasuk, through the newly-launched Arab crowdfunding platform Zoomaal. This astonishing total speaks not only to the enthusiasm (and collective deep pockets) of Mashrou' Leila’s fans, but also to exciting new possibilities for young musicians who want to diverge from the well-trod path to Middle Eastern pop stardom.

“The band has always said: if we can do it, anyone can,” says guitarist Firas Abou Fakher during our conversation at the band’s Sioufi jam space. He is almost certainly being modest: the band has released three records, shot three music videos, and toured extensively throughout the Middle East, Europe, and Canada in less than five years – all without the financial support, and attendant meddling, of a record label.

This entrepreneurial spirit is unmistakable in their eight-minute promotional video for the Zoomaal campaign, in which the band’s five members and attractive fans from the Beirut alternative scene wax poetic about Mashrou' Leila’s unique position as the only indie band singing in Arabic whose music is nearly universally regarded as good, as well as how the band’s music and lyrics capture the angst of young people in the region like no other.

The decision to include fans in their crowdfunding pitch is reflective of the extent to which the band’s success has hinged directly on the passion of the people who listen to their music – more so than other musical acts that have been financed by more traditional means. From their first gig on the American University of Beirut campus in late 2008, Mashrou' Leila made friends in high places; friends that went on to facilitate the recording of their first album (at Beirut’s B-Root studio) and the production of their first music video (by Yelo Studio, also in Beirut). Fakher says that this video, for their song “Raksit Leila”, was the catalyst for regional stardom, at which point they began making real money from touring.

But emphasizing the strides Mashrou' Leila has made based on connections from AUB and the Beirut scene would be underestimating the capacity of their music to charm. Even those who don’t like the songs usually admit that the band’s musical identity is admirably unique. In any case, like them or not, Mashrou' Leila has at one point been the topic of cigarette-break conversation at every bar and college campus in Beirut. Fakher, as well as the hipster-lefty luminaries in their Zoomaal video, emphasize that this saturation is partially thanks to the “mood of the country” at the time, whose bars and clubs featured almost exclusively trance DJs and silicone-d pop idols indistinguishable from one another. The Zoomaal campaign asked if young people in the Middle East were ready for a self-styled band that sounded different. They answered yes, resoundingly. It seems Mashrou' Leila is a band whose time had come.

Taking into account Mashrou' Leila’s right-time-right-place luck, could crowdfunding be a viable source of funding for less timely and well-connected young musical acts in the region? Yes, says Fakher, but with some reservations: “crowdfunding for bands can work if the projects to be financed are smaller and more specific, like $12,000 USD for a new video,” or $6,000 USD to pay for studio time. Also, it’s not a tactic bands can turn to again and again: Mashrou' Leila won’t be using crowdfunding again soon, if ever, Fakher tells me, because even during the initial campaign they got tired of asking people for money day after day.

Mashrou' Leila members tossed around the idea of crowdfunding when considering how to finance the release of Raasuk, but Fakher describes them as being “hesitant” in going ahead with it until Zoomaal CEO Abdallah Absi approached them shortly after the platform’s July 4 launch. They figured that Zoomaal’s focus on projects based in the Arab world would jibe nicely with their own pan-Arab approach to their music and image. They also thought their dual projects could help propel each other to new publicity heights.

Zoomaal may provide fresh opportunities for bands whose projects would get lost on global sites like Indiegogo or Kickstarter, but it seems that in order for crowdfunding to succeed anywhere, an act must already have a sizable crowd supporting it. Palestinian band Khalas launched an Indiegogo campaign in April, asking for $7,000 USD to cover the album’s production and distribution. They raised around $4,000 USD, and only about 5 percent of the band’s fanbase contributed, members told Wamda. Similarly, of the 22,406 people who viewed Mashrou' Leila’s Zoomaal page, only 543 people – 2.5 percent – made a contribution. The average contribution of Mashrou' Leila fans, over $100 USD, is also much more than the average fan can be expected to contribute to hear a band’s latest work.

Despite Fakher’s protestations, Mashrou' Leila is without a doubt an extraordinary success story, having thrown a stylish wrench in the gears of the Arab pop machine. Whether their DIY success has set a new precedent for indie Arab acts remains to be seen, but at the very least, their success with Zoomaal has paved the way for other musicians to find their crowds too.