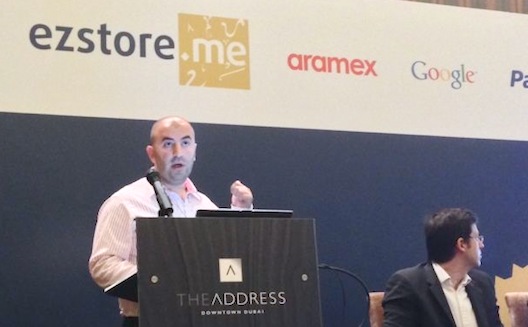 With 30 million people shopping online today in the Middle East and North Africa, in a market expected to reach $15 billion by 2015, e-commerce is one of the biggest opportunities in online business in the region. Yet, the online market is still dwarfed by offline retail, which is valued at $425 billion.

To make it simpler for offline businesses to go online, four of the region’s major e-commerce players have debuted a new initiative. Today, Aramex, Google, PayPal, and ShopGo launched EZstore, an e-commerce solution that combines a customizable e-retail platform with discounts on payment gateways, logistics, and advertising.

Called a “minimum risk online store,” or a one-stop shop by its creators, EZstore will offer online retailers a $100 discount on Aramex logistics, with further competitive rates, a $300 credit on Google AdWords, along with 13 weeks of dedicated Google support for new campaigns, in English, French, and Arabic, and three months of transactions on PayPal free of charge. The platform itself, built by ShopGo, will be offered at $650 for the first year.

“[EZStore gives] offline retailers an opportunity to very easily and very seamlessly to go online, leveraging the most specialized players in this field,” Tarek Abdalla, Google’s Regional Head of Marketing for MENA, summarized at the press conference.

Mohannad Ghashim, the founder and CEO of ShopGo, presented the EZStore platform during the conference, walking the crowd through the elements of the software and the platform's perks (see below). [Disclosure: Wamda Capital has invested in ShopGo.]

Wamda, which has partnerships and connections to all four companies, facilitated the partnership. In an opening keynote, Wamda Chairman of the Board and Aramex Vice Chairman Fadi Ghandour noted the various challenges facing e-commerce startups, from tariffs in cross-border shipping to cash-on-delivery, but noted that the "indicators are good." All the same, "we need more companies to come out and do what these companies are doing," he emphasized.

Representatives from all four companies emphasized that the move was not just to sell more products, but to express the values that they stand for, regionally and globally.

“It’s very much in our DNA to help small businesses succeed on the web,” said Abdalla, who admitted in an aside after the press conference that, while Google has often supported small e-commerce businesses as they come online, it’s never done anything this large or formalized in the e-commerce sector.

Francis Barel, the Head of Business Development, PayPal, MENA, echoed a similar sentiment. “Google and Paypal started as really tiny companies in California. People tend to forget that we still have this drive in our DNA. We thought that this was the best way to get entrepreneurs online. How can we put our money where our mouth is?” he said, pointing out that those who use EZStore will be able sell to over 132 million users in 193 countries.

With 110 million people online in the Arab world, of around 400 million total, “We are at an inflection point,” said Habib Haddad, Wamda’s CEO.

It’s a narrative that many are familiar with, but that doesn’t make it any less true; despite the myriad challenges that e-commerce companies face, it's potentially one of the most lucrative sectors in the region, one that investors are backing heavily (over $110 million in total was invested in e-commerce companies last year, which accounted for 85% of the region’s total investment in internet startups). The hope is that EZStore will galvanize this process by removing "the fear factor of the unknown," said Hassan Mikail, Global Director of e-commerce at Aramex.

How will EZStore be used?

After the introduction to EZStore, members of the crowd grilled the panelists, asking about the customizability of the platform, whether it will accept Emirati Dirhams (AED), whether users need a trade license to use the store, and how many users EZStore’s creators expect to have.

The answers: the platform will initially offer 32 themes initially, with another six added every month, said Ghashim.

The platform will charge in US dollars, Barel of PayPal clarified, although EZStore’s interface will show prices in local currencies.

Everyone who sells on the store will need a trade license, whether they register in a free zone or not, Mikail of Aramex confirmed. It’s up to the merchants to make sure that they comply with local regulations, said Wassim Kabbara, Google’s Head of Retail for the Gulf.

Stakeholders are attempting to make the licensing process easier. “We're in constant contact with regulatory offices,” Mikail of Aramex assured the group.

When asked about the repercussions should an EZStore retailer offer counterfeit or contraband goods, Mikail and Barel assured that background checks and strong customer protection policies are in place to prevent illegal use or misrepresentation.

And finally, on the topic of market size, Mikail noted that he would hope to see a few hundred stores come online this year. When Aramex launched a similar initiative in India, 3,000 to 4,000 merchants signed up, he recalled; the partners hoped that EZStore would urge similar growth in the Middle East on par with a more nascent market.

For now, EZStore is focused on the UAE, with plans to expand across the region. Learn more at http://www.ezstore.me.