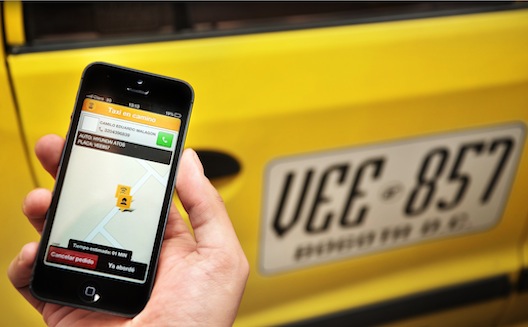 iMENA, which prefers a path to a majority stake in most of its portfolio companies, wouldn’t disclose the amount of equity secured, but Khaldoon Tabaza, iMENA’s managing director, confirmed that only iMENA and the global Easy Taxi entity jointly own the new regional Easy Taxi entity.

Easy Taxi, which launched in 2011, currently operates in 15 markets, in Latin America, Africa, and Asia, where it allows users to open up a mobile app, enter their location, and order a taxi on demand.

To fuel its rapid expansion, it's already raised $30 million: $10 million from Rocket Internet and Africa Internet Holding in July, $15 million from Latin America Internet Holding in June, and $5 million in seed funding from Rocket Internet late last year. Yet this $7 million is exclusively focused on the company's expansion in the Middle East (implied: this might be the only portion of Easy Taxi's funding focused on the Middle East).

The move is iMENA’s second tie-up with a Rocket company, after investing $8 million in HelloFood last month. Although iMENA is pouring capital into Rocket properties, it doesn’t have an overarching investment agreement with the German entity, says Tabaza: the two “work closely with one another."

As with HelloFood, Rocket isn’t wasting time as it goes for a land grab in Saudi Arabia. Easy Taxi hasn't officially launched, but is in beta mode in Saudi, says Eyad Alkassar, the Managing Director for Rocket Internet in the Middle East. The plan is to expand throughout the GCC, and possibly Jordan and Lebanon. Conspicuously absent is the market inspiring the most taxi service and traffic-measuring apps lately: Egypt.

Easy Taxi has already arrived in Saudi ahead of global rival Uber, the San Francisco based car-ordering mobile app that just launched in the UAE, adding Dubai to the 54 cities it serves around the globe. (Hailo, the taxi app that Easy Taxi more closely resembles, has not entered the Middle East).

Uber’s local rival, Careem, a car-ordering mobile app launched out of Dubai, is already in Riyadh, growing 50%-60% month-on-month since it launched this summer.

Alkassar shrugs off the competition. "Careem and Uber are in the limousine sector, but we are focusing on taxis. Taxis are a bigger market, and a different market; they are not really competitors."

To suggest that two car-ordering services won’t compete in the Saudi market sounds like a quick dismissal; on the ground, Easy Taxi's model is very similar to Careem's. The Rocket company works directly with local drivers, not partnering with a specific taxi service. (Alkassar says that Easy Taxi will partner with taxi services “if they are interested,” but notes that in Saudi Arabia, the company is mostly partnering directly with drivers.)

Although bespoke limo services and taxis are slightly different markets, in Saudi Arabia, the biggest differences between the two services will likely come down to their customer service, cars, and pricing. Careem has worked to supply Lexuses and high-end Audis; Easy Taxi will offer standard taxis. Easy Taxi, like Uber, offers on-demand rides, and, unlike Careem, doesn’t require a destination ahead of time. It doesn’t calculate the fare or offer credit card payment, instead allowing riders to negotiate the trip fare on their own or use the meter. Users will not be able to book a trip to or from the airport ahead of time, a niche Careem currently owns (and one that's popular in this region). Easy Taxi will, however, offer pre-booking for corporate deals with clubs or restaurants.

With $7 million in its pockets, Easy Taxi will have more capital to play with than Careem, which just secured $1.7 million from STC Ventures. While Careem will benefit from STC’s local infrastructure and placement in its app store, Easy Taxi take advantage of the global experience and design and development teams that Rocket provides, Alkassar says.

Alkassar insists that Easy Taxi “has a heavily experienced and developed product,” but stops short of saying it’s superior to those of rivals. Yet the company still has some bugs to work out. From my perch in Beirut, the app could not locate The Marriott in Riyadh. When I requested a taxi in Riyadh, it insisted that I select from several options for payment in Dinheiro, Brazil’s currency, and then insisted that I add a number in the address field before I could book a taxi. This is the beta testing phase, after all.

Whether either service succeeds, regardless of rivalry, will come down to its execution, driver quality being the toughest variable to control. Whether riders prefer the luxury cars and pre-determined fares that Careem offers, or paying in cash for a regular taxi on Easy Taxi, good, courteous drivers could be the commodity in short supply. Keeping those drivers happy and loyal could be tricky in a market in which exclusivity has little meaning.

iMENA’s Tabaza agrees that success will come down to execution, specifically, “who can market better, sign up more cars and taxis, and get more passengers.” Yet, he says, “this is a massive market. There's enough market share for all companies to grow significantly."