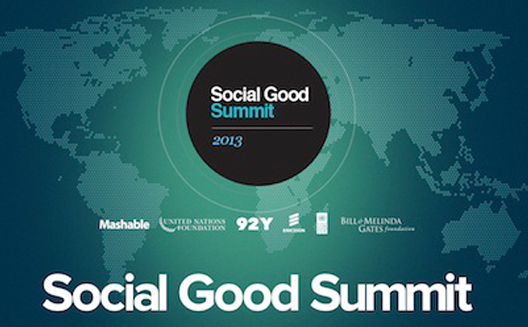 CAIRO, Egypt The United Nations Development Program (UNDP) hosted last week the Social Good Summit: a discussion about new media and technology’s roles in local development as part of the Social Good Summit held in several cities around the world. For the first time, Egypt participated in this summit, held in the Egyptian Ministry of Telecommunications.

The newly-established Egyptian Development Program broadcast the discussion directly on YouTube and other electronic channels, as well as on Twitter using the hashtag #2030NOW and the @SGS2013_Egypt account to facilitate interaction with the public.

The participants represented social initiatives searching for solutions to challenges in education, unproductive political debate, and sexual harassment, with a special focus on the needs of youth, women, and those with special needs. The participants reported that they are working on developing mobile apps in particular.

The participants agreed that enriching the entrepreneurial ecosystem in Egypt with new ideas facilitates targeted growth, creating the potential for greater social impact than under the current system.

While some consider technology a luxury in addressing social challenges, the impact of technology in Egypt is undeniable. The number of internet users has reached 33 million, around 40% of the overall population; the majority of these are less than 25 years old. 45% of internet users access it from smartphones (but the jury is out on the smartphone penetration rate in Egypt: Google stats says it is 26% while Ipsos told Arabnet in March that it was only 5%).

These figures are especially relevant against the backdrop of widespread use of technology among young people, the same group that suffers disproportionately from unemployment. Recent figures show that eight out of 10 jobless Egyptians are under the age of 30, and more than a quarter of these hold a university degree or higher..

Entrepreneurs joined the discussion in person and via direct e-broadcast. They shared their ideas and outlined some of the social initiatives that use technology to develop Egyptian society:

Nouhad Al Ghamry, the director of the Vodafone Foundation for Society Development, also summarized some of the initiatives his company has adopted in Egypt focusing on mobile technology in social development. These initiatives include connecting remote hospitals with bigger ones to offer medical consulting services using 3G, a project to support handicrafts in Siwa, in Egypt’s remote west, and using mobile apps to target 120,000 under-educated people in 18 Egyptian provinces.

The discussion was not without controversy, especially surrounding the ability of technology to reduce unemployment. Despite the fact that it has helped lead to job creation in handicrafts and IT sectors for people in remote areas, technological advancements have also made human labor obsolete, replaced by advanced devices capable of tasks previously performed by people.

But the controversy, at the very least, is indicative of an audience engaged with the topic. Egyptians, it seems, are interested in the increasing role technology can play in their lives – even if they’re hesitant to adopt it.