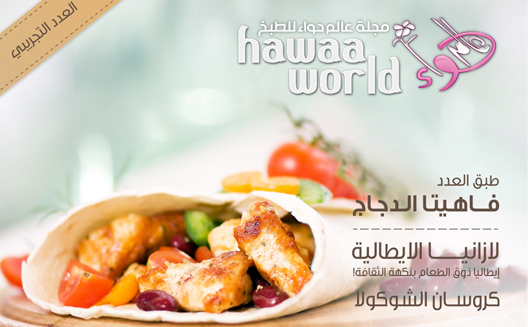 HawaaWorld is one of the oldest and most popular user-generated content portals targeting women in the Arab region. The platform, which has been owned and operated by N2V since 1998, whose name means "The World of Eve," has built its community by offering daily announcements, fun videos, recipes, classified ads and lifestyle advices for women, and kept scaling up throughout the years.

Today, the HawaaWorld team is living the dream most other startups in the region are chasing: using their popularity in Arabic and Saudi Arabia to generate ad revenue, by offering "premium advertising opportunities to top brands targeting women," says Mohammad Khawaja, the Executive Director at N2V.

With two million registered users, six million unique users and 80 million page views per month, the platform ranked fourth on Forbes Middle East's Top Websites in the Arab World in 2012, hitting #1 for women. Today, it ranks as the 62nd most-visited website in Saudi Arabia, according to Alexa, whereas rivals like UAE-based Layalina and Nawa3em rank 474 and 722, respectively.

To target a Saudi audience, the platform prioritizes local news in the Kingdom; a few recent examples include the upcoming eclipse awaited in the Kingdom later this year, the date of the next daylight savings, and announcements on available trainings for women.

From web to print to mobile

Initially the platform rose to popularity by hosting that cornerstone of early sites in the Arab world: forums. One of the most popular topics discussed on its forums over the years has been recipes. In late 2012, Hawaaworld decided to enter that other old school segment: print. The portal launched a monthly magazine, yet after printing six copies, it recently pivoted into digital, launching an interactive iOS magazine called “The Hawaa World Cooking Magazine,” currently available for both iPad and iPhone.

Being an N2V startup made the process easier, as the team leveraged N2V's mobile development engine Startappz to build the magazine, which was released on iPad this Ramadan. The Startappz team developed the interactive magazine to be a direct extension of the portal, to build upon the momentum of its existing community.

“The magazine takes the most popular recipes developed by forum members, in addition to hand-picked food and beverage content by chefs and experts, and publishes them in an interactive format on tablets and smartphones," says Hama Yassen, the Startappz Interactive Media Manager.

Thus far, the magazine has published three issues so far, which have gained traction; the first two Ramadan issues saw more than 50,000 downloads in less than a month, and the third issue, which was published in September, has seen over 100,000 downloads.

Globally, recipes are in demand; in 2011, Google launched a recipe search feature to improve responses to the one billion recipe queries it receives per month. The sector is also wildly popular in the Arab world, where HawaaWorld's competitors include Lebanon-based recipe portal Shahiya a key leader in the market who recently reached 1.3 million unique visitors per month and 2.5 million unique visitors during the month of Ramadan in 2013. Shahiya has also cornered the Saudi market, thanks to the fact that many women are a “captive audience,” as co-founder Hala Labaki told Wamda recently.

Other players in the recipes sector are 3a2ilati's channel Atyabtabkha ("the tastiest cooking"), and recipe channels on Supermama and Layalina.

HawaaWorld is counting on a few things, to differentiate itself: a unique user experience with interactive elements that, in the future, will allow users to "mix" recipes. "Adding gamification is something we will be looking to. Users will be able to drag ingredients with their fingers and mix their recipes on the app,” says Yassen.

A main element is that differentiates Hawaa World’s magazine from others like CookeryPlus and Fatafeat, is the fact that it's free. In the future, the Startappz team might help HawaaWorld implement product placement deals, Khawaja says, claiming, "We have no plans to make any money [currently]."

It remains to be seen whether HawaaWorld's iPad app will have traction in Saudi. A few challenges remain; thus far, N2V's team, which is used to publishing in print, has had difficulty with the HTML5 they're using to build the app. “Our team is struggling with new technologies to build an attractive iPad application, like using HTML5 and multi-touch design... with time we will overcome this,” says Yassen.