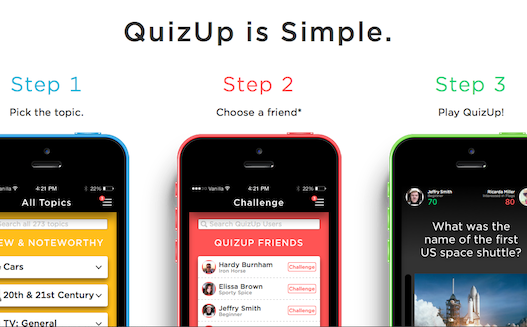 There’s no secret to building a good game, especially in the Middle East. Despite the fact that people in the region – especially the Gulf – are some of the world’s most active gamers, with a market estimated to be around $1.4 billion USD in 2011, there still hasn’t been a massively successful game produced here. Only about nine original games stand out from the past year, of thirty launched, as Wamda’s resident gaming expert reported last month.

Based on a recent series of interviews with Thor Fridriksson, CEO of the Icelandic Plain Vanilla Games, we put together this list of a few rules that development companies all over the world can follow to build a mega successful game.

Plain Vanilla’s QuizUp, only three weeks old, might be an eleventh hour contender for 2013’s biggest story in mobile apps. It already has 3.5 million users, each of whom plays the game for an average of 40 minutes per day. Plain Vanilla recently raised $2.5 million USD in a Series A round (after its founders moved to Los Angeles on a tourist visa without knowing anyone in town).

Here are some tips, based on QuizUp’s crazy success, drawn from Fridriksson's interviews in New York Magazine and All Things D:

Learn from your mistakes

Prior to QuizUp, Plain Vanilla almost went belly up in 2011 after the failed launch of The Moogies, a game for pre-school kids. The game’s “beautiful title,” according to Fridriksson, didn’t help it in head-to-head app store competition with a Dora the Explorer game that launched around the same time.

So the next time, instead of competing with 800-pound gorillas, Plain Vanilla harnessed their power.

To do so, Fridriksson and his team piggybacked onto popular existing cultural phenomena. The most successful mobile games, he reasoned, were those that had been transferred from offline to mobile – like Scrabble / Words with Friends and Pictionary / Draw Something. The familiar rules and structure make the game easy to master, and the element of nostalgia lends them a kind of cozy, communal quality. Trivial Pursuit, the North American mid-century living room staple that tests players’ general knowledge of pop culture, hadn’t successfully been taken mobile yet – so that’s just what Plain Vanilla set out to do.

“Having gameplay that’s familiar to you is a huge advantage, because you can get right into the game,” Fridriksson told New York Magazine.

Once QuizUp was ready, the Plain Vanilla team had their second brilliant idea: the nearly-always smart business plan of jumping on board the Twilight bandwagon. In Los Angeles, they partnered with Lions Gate Entertainment to develop a specific QuizUp for Twilight’s rabid teenaged fans. Numbers and feedback from the game were “off the charts,” Fridriksson told All Things D. It was on the strength of this specific game that they attracted attention – and money – from Greycroft Partners and Tencent.

Part of QuizUp’s success surely comes from the sheer breadth and depth of its content. There are already more than 200,000 trivia questions in niche categories like Herbs & Spices and the cult television show Arrested Development, and users are able to add their own questions as well. This way, QuizUp has become more than “just one game,” Fridriksson says, “but more of a platform.”

Obviously it’s easy to get specific when you’re shilling a trivia game, but Fridriksson’s statement, that "people don't get passionate about really broad categories... but people get passionate about a specific band, or a movie, or World War II," is one that’s transferable to other gaming sectors. Create one thing on which people can nerd out, then iterate to infinity.

One thing we all know about nerds is that they like to stick together, so QuizUp acts, for all intents and purposes, as a social network. Each trivia category has its own message board, on some of which, like Physics, “really intellectual discussions” are being held. Of course, many of the discussions are drivel. But regardless of the caliber of what’s being discussed, encouraging users to talk to each other increases the average amount of time users spend on the app, which looks great when pitching to investors.

Once one thing works, drop everything else

As soon as QuizUp went up, it went viral (its one millionth user registered just eight days after launch). Since then, Plain Vanilla has “evolved from being a game studio that has multiple titles into just being QuizUp,” Fridriksson says. Despite its popularity, the Plain Vanilla / QuizUp team still has work to do, including developing the app for Android (if you’re a developer, by the way, they’re hiring).

This is one tip to take with a large grain of salt, given the flash-in-a-pan nature of many mobile games (Draw Something, the mobile version of Pictionary, lost almost a third of its daily active users in one month last year, right after its developer was acquired for $200 million USD by mobile giant Zynga). If your team drops everything to work on one mobile game that goes defunct, they’ll have a lot of catching up to do with their other projects when the time comes.

With these tips, and more innovation from makers working in a shifting Middle East gaming topography, maybe 2014 will be the year of the first viral game made in the region. Get working!