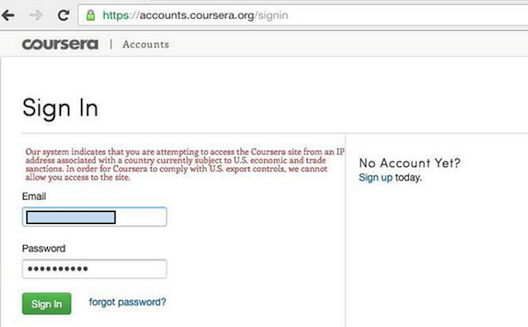 UPDATE: Coursera has released a statement explaining the blocks on which Wamda reported here, stating that it has reinstated acess in Syria.

"Under [US export control regulations], certain aspects of Coursera's course offerings are considered services and are therefore subject to restrictions in sanctioned countries, with the exception of Syria," the statement says.

Since learning about an exception to these regulations from the US State Department, "which authorizes certain services in support of nongovernmental organizations' activities in Syria, particularly as they pertain to increasing access to education," Coursera has restored full access to students in Syria.

But Coursera remains blocked in Sudan, Iran, and Cuba, countries which fall under US sanctions regulations. "Coursera is working very closely with the US Department of State and Office of Foreign Assets Control to secure permissions to reinstate site access for students in sanctioned countries," the statement continues. "The Department of State and Coursera are aligned in our goals and... are working tirelessly to ensure that blockage is not permanent."

This has not been an issue in the past because the "export control regulations as they relate to MOOCs has been unclear." When Coursera was alerted by the State Department that it was in noncompliance, "we instituted a restriction in compliance with current export controls to ensure that our business remains in good standing with the law," the company states.

This effectively clarifies that the blockages are not related to its monetization policy, but simply a result of new clarity in US economic policy when it comes to Massive Open Online Courses (MOOCs).

Of course, for a tech-savvy community, an IP block is never the end of the story. Students could, in theory, use Virtual Private Networks could bypass the blockage, commenter Karim Naguib, lecturer in Economics at Boston University, points out at the end of this article. "There are tons of free VPN providers out there," he writes. "Here's a link to one."

Just over six months ago, online education platform Coursera thanked a Syrian doctor for a poignant blog post that spoke directly to its mission to change the world by educating the masses.

In a brief, heartfelt post, Dr. Mahmud Angrini explained how the U.S.-based learning portal, initially founded by two Stanford professors, changed his life. After losing everything in the strife that engulfed Aleppo, including his lab, his PhD scholarship, his friends, and his family, he found solace in taking massive open online courses (MOOCs).

“What I can assure you is that Coursera changed my life during those painful months…. [The courses] helped me forget my pain, depression, and suffering, replacing my pessimism with hope and entertainment,” he wrote.

“Nowadays, I always tell my friends in refugee life: 'It is never too late to start again,'" he continues. "Someday, the war will end, and we will come back to our homes and our former lives to contribute to the reconstruction process in our country. To do so, we need to learn new skills, and this could only be achieved through continuing education. We can take advantage of the high quality courses that Coursera offers at no cost.”

In an introduction to the post, Coursera’s editor raves, “Thank you, Mahmud, for living Coursera’s mission to create a world where people can learn without limits.”

Yet today, Dr. Angrimi no longer has that lifeline, as Coursera appears to have blocked Syrian IPs since Friday.

“Our system indicates that you are attempting to access the Coursera site from an IP address associated with a country currently subject to U.S. economic and trade sanctions. In order for Coursera to comply with U.S. export controls, we cannot allow you access to the site.”

Thus far, attempts to contact Coursera both via its Facebook page and its support channel haven’t yielded a response, says Ahmad Sufian Bayram, the MENA Connector for French collaborative consumption network OuiShare, and Lead Organizer of the upcoming Startup Weekend Damascus, who has written for Wamda about the how collaborative consumption could solve myriad issues in the Arab world.

Although Coursera has grown since its launch in 2012 to involve over 100 institutional partners in 19 countries, providing courses from 700 professors to around 5.5 million students, a generation of Syrian students like Dr. Angrimi have found themselves left in the cold.

“This really bad for us,” says Bayram. Thanks to the current conflict, “most people cannot go to universities, and cannot take extra courses, so we look to free online courses to make up the difference. We rely on these courses for knowledge, to learn how to become entrepreneurs,” he explains.

A couple of posts on Coursera’s Facebook page also revealed that the site is blocked in Iran, for the same reason.

“Are there #sanctions on educational material too?” wrote Saleh Amini. “We were just forming a study group here in Tehran last week to join many other study groups. It is disappointing.” Several others have replied to comment about the seeming conflict with Coursera’s mission “to change the world by educating millions of people by offering classes from top universities and professors online for free.”

The move comes just days after an announcement that Coursera will expand its paid offerings, now giving students the option to obtain a certificate in “Specializations,” or themed tracks of closely connected courses, by paying $250 to $500 USD. A year ago, the platform first moved to monetize its courseware by debuting paid courses for $30 to $100 USD, guaranteeing students a certificate if they verified their identity.

After raising $63 million USD this past November, following an initial round of $16 million USD, the company is now clearly on a mission to find a viable business model. Currently, it offers a revenue share model, granting 6 to 15% of revenue and 20% of profits to universities for courses taught by their professors. To reach its founders’ goal of offering real university credit, it will have to prove that students will pay.

Yet the notices posted in Syria and Iran illustrate that the company’s need to comply with U.S. economic policy will cost it a universal presence.

Coursera isn’t alone in that predicament; Coursera competitor Udacity, which is also for-profit, has been banned for a while in Syria, says Bayram. One site that still works is edX, the nonprofit MOOC platform founded by MIT, which offers courseware for free.

Yet edX only offers a few courses, says Bayram. For the foreseeable future, there’s no solution. “We rely on these courses to improve our thinking and to get more jobs,” he explains. “This is going to be difficult.”