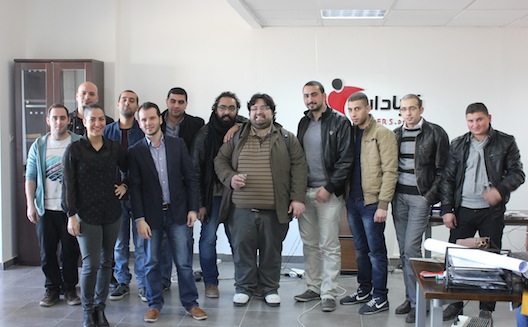 Palestine’s first startup accelerator, Fast Forward, announced its second class on January 20th. The new group of startups focuses on tech-based solutions to a variety of issues, ranging from digital music distribution to bringing the cash economy into the digital age.

Four teams were selected from a pool of 75 applicants in a rigorous, two-phase application process. They are now embarking on an intensive, four-month long acceleration that aims to bring the nascent businesses to market readiness.

One of the teams represents a collaboration between veterans of the Palestinian indie music scene that is developing an innovative, online platform to help musicians and bands reach audiences.

The project, still untitled, is about “giving indie musicians and bands ways to distribute their music through their fans,” according to CEO Abed Hathout, who is also a member of the band Khalas, known for its use of crowdfunding.

Drawing inspiration from gaming strategies and online music sharing, the team’s interface will provide incentives to fans for promoting their favorite artists’ music through social media. The platform will be free for bands to use. “Any band can upload their album, forget about it, and just make money,” says Nihad Aw, the project’s web developer.

The team believes dedicated fans can be the best promoters of their favorite music. “As a music lover, it’s something I would love to do,” Hathout says.

The idea has traction beyond the MENA region, according to Mahmoud Jarere, the project’s founder and member of the Palestinian hip hop group DAM. The team members are planning on leveraging their networks to promote their concept to indie music lovers around the world.

Another team is working on a social network for food and recipe sharing called Sufraty, or ‘my dining’ in English. The website, which has already been activated, allows users to post photos and recipes for their followers and friends to like and share. In the future, professional chefs will have pages and profiles with which users can interact.

While there are several other food and recipe sharing social networks in the region, like Shahiya and Foodlve, what sets Sufraty apart, according to co-founder Jaafar Abu Sair, is that they are working on a mobile app, which neither of the other sites have done yet. Further, Sufraty is "simple, social, interactive, and Arabic," he says, pointing out that Foodlve is in English and Shahiya is not social or interactive enough.

The team expects to generate revenue from premium accounts that provide access to more features, as well as advertising and company sponsors. The Sufraty team’s plan is to use their time at Fast Forward to build a mobile application, and to attract more users.

A third team is developing an online interface, called Seen Lab, to connect tutors with pupils. “Think of it as a huge knowledge base with live streaming on demand,” says CEO Rami Mansour.

The platform will work by connecting verified tutors with knowledge seekers in interactive online sessions. The team is initially focusing on cultivating a network of tutors in music and computer programming. Once they flesh out these two niches, they will expand the platform to include other skills.

Drawing inspiration from Cosera and Skill Share, Mansour and his team are focusing on Arabic content for the MENA region so as to improve access to knowledge and the ways it is transferred.

During the Fast Forward acceleration process, the team will be focusing on reaching more countries, and turning the concept into a vibrant online community, Mansour says. “We had great ideas,” he adds. “We needed somebody to… accelerate those ideas.”

The final team is working on a solution to overcome obstacles to online purchasing and reservation-making in the MENA region, where 80 percent of people either don’t have bank accounts or aren’t sufficiently served by their banks, according to the project’s co-founder and CEO Rasha Ali.

The startup, called feeKash, is working on developing a strong network of merchants who will serve as payment points for online purchases. Users will be able to make an online purchase or reservation and then go to a local merchant to pay.

Local merchants will also benefit because they will receive a percentage of the sale and walk-ins from feeKash users.

The team is launching the concept in Palestine to pilot the technology, but plans to expand throughout the MENA region.

Fast Forward’s new class will be going through a restructured program focused on weekly modules. Each module will cover different skills, such as business pitching, marketing, product development, and user experience, that will help build the teams’ capacities, according to Peter Abualzolof, Fast Forward’s new coordinator.

The new structure is meant to recognize that the projects involved are early stage startups. As such, the participants still need training and development, Abualzolof says.

But despite the refocusing, Fast Forward’s overall goal remains the same: to develop successful Palestinian tech startups so as to pave the way for a growing entrepreneurial ecosystem in Palestine.