Some of you may already know that we just closed a $200,000 USD financing round from some angel investors Sim Whatley, Saif Alzarouni, and Abdulaziz AlLoughani. Many have been asking me about how we raised the money and the experience as a whole. Here are some responses that may be useful to startup founders:

We always knew that we would eventually need to raise money to sustain and grow our startup. However, my co-founder Jose and I didn't decide how much we wanted to raise until late April 2013. We had the feeling that money is everywhere and it would be easy to raise over a million dollars, based on the funding rounds we read about every day on Wamda and TechCrunch. But, we both agreed at the end that we wouldn’t raise a lot money just because we could; we would raise only the money we need to achieve the milestones we set for the next 12-18 month period. After many discussions with our advisor Omar Koudsi, we decided to raise $200,000 USD, a big enough sum to help us grow our team and business, and small enough to close the round fast with individual angel investors.

In short: Raise enough money to survive and grow your startup for the next 12-18 months. Prioritize investment from angel investors rather than VCs in an early stage, as VCs take much longer to make their decision and require more hard terms to close the deal.

2. Where to find the investors? And how many investors to approach?

We had a short list of investors (this was a mistake; the more the better) we planned to approach. Before doing anything, I decided to join the round as one of the investors. I put in all of my savings and got a small slice of equity. 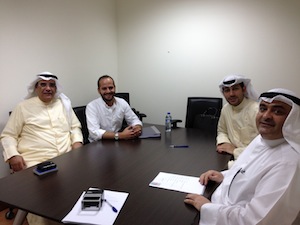 In June 2013, we started meeting investors. I started with a good friend, Abdulaziz AlLoughani (pictured back right), the former managing partner at Talabat.com, and the current executive manager of a Kuwaiti SME investment and development fund and angel investor, whom I met at the first StartupQ8 event.

He organized a small demo day for us to pitch in front of some other angel investors in Kuwait, and around five showed up. After my pitch, Abdulaziz agreed to come in with a couple of investors for a good portion of the round. Here we covered more than 50% of the round. That was quite quick and easy, thanks to Abdulaziz’s continued support and StartupQ8.

I was always careful of who should join as an investor, as its not as much about the money as it is about the added value that the investors bring to the table.

There was one investor whom I really wanted on board, but I didn't know how to reach him. Our advisor, Omar Koudsi, came to the rescue again, sitting with the investor to tell him about Fishfishme. The investor seemed to be interested and put us in touch with one of his team. Then things got a bit difficult; it took them a lot of time to get back to us and they missed all of the deadlines.

After spending some time thinking about how time-consuming it would be to raise the last $50,000 USD, we decided to go with the amount we secured – 150K – and move forward with our startup and focus again on the business. 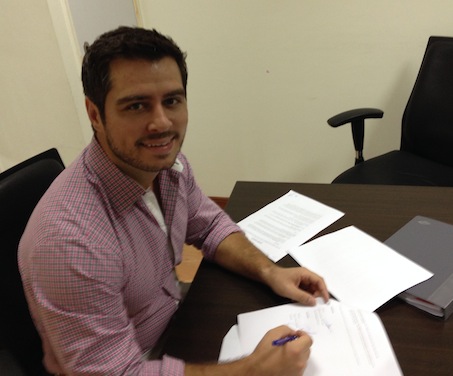 That was mid-August. After that, we started preparing the term-sheet and the structure of the company. Everything was ready to be signed and move forward with our plans, until a customer was chatting with me one day, using the chat function on our website, about a fishing trip he wanted to book to Muscat, Oman. This customer happened to be Sim Whatley, the co-founder of Dubizzle.com, who, after a deeper conversation, became our investor and advisor. Saif, a friend of Sim’s (pictured at left), also heard about the deal and came on board a few days before we signed the term sheet.

In Short: Pitch to as many investors as you can. More options gives you leverage when negotiating with investors. We approached one group of investors in Kuwait and another regional angel investor. That’s it! If I could go back in time, I’d approach 20 more investors. We got lucky that Sim found us by coincidence and helped us close the rest of the round.

Start raising money at least six months before you run out. We didn’t listen to our advisors when they told us to do that. Finding investors that are willing to invest will take one to two months. Agreeing on the term-sheet will take another month, and closing the deal and changing the company structure will take one to two months. So it will take at least three months before you have the money in the bank. It’s a long, tough, and hectic process. So give your company enough time to raise money before you run out of cash and burn alive.

In short: Starting raising six months before you run out of money.

I’m an impatient person. When I look at fellow entrepreneurs, I find that most of them are the same way; we move fast and we want everything to be done quickly. But, when raising money, you need to learn to be patient.

I went crazy when the investors weren’t answering my emails. I started sending follow-up emails, and if they didn’t reply, I sent them direct messages on Twitter. And when this didn’t work, I started calling them. I regret being impatient in some situations, but I learned a lot in the end.

During the process I felt disrespected by some investors, as though I was begging for their money. Some investors are arrogant and will enjoy making you follow them. They will never say "no" to you; they will just put you on hold. These are the worst types of investors. Just send a thank you email and move on to the next investor.

Many other investors are nice, and even if they are not willing to invest, they will find a way to say "no" nicely and probably help you with other things. I found that most of these cool investors are former entrepreneurs, so they fully understand your situation.

In short: Be patient and wait. It’s a long process and investors are always busy being pitched by hundreds of other cool startups just like you. Give deadlines to investors to submit their official offer, stick to your deadlines and be ready to leave the table.

My last piece advice is to talk openly with other fellow entrepreneurs about what’s happening. Talking to other entrepreneurs made me feel much better, especially that I found that many are having similar experiences.

In my next post, I’ll focus more on the term sheet and other papers that we needed to prepare and sign to close the investment.