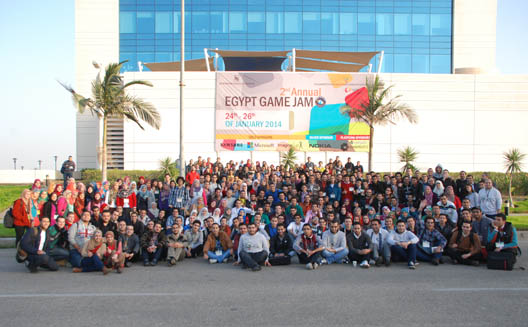 The Egypt Game Jam is the local version of the global Game Jam brand, the world's largest event for young game developers. Developers gather in an action-filled atmosphere, to work for three days on electronic games with a certain theme revealed during the first day of the event. Developers exchange knowledge and experiences, while challenging themselves to make a complete new game within the specified time of the event.

This year's theme was ‘We don't see things as they are; we see them as we are’. Compared with the 28 new games of last year, this year's Game Jam facilitated the release of 54 new electronic games.

“This event helps boost the game design and development spirit, encourages innovation and creativity, and gets the community together,” says Fatma Al Ashmawi, marketing executive at the Gaming Center of Excellence at the Information Technology Institute.

This year, the event featured group activities, a startup fair, expert speeches, and game development tutorials. Participants formed teams, and proposed ideas (combining similar ones according to interest and expertise), and started developing their games.

The following games made it to the winners list:

In spite of the hardships, Al Ashmawi believes local developers and programmers are getting more talented everyday. “Mobile games are providing the best opportunity for game developers to test their skills and try the market, with little risk involved,” she says. “With a little more effort and support for the gaming community, more opportunities will be provided for developers to shine,” she adds.

Developing electronic games, and mobile games in particular, is becoming very popular in the region. There has also been a leap in venture capital investment in the gaming market; GameTako, for example, secured funding from N2V last year.