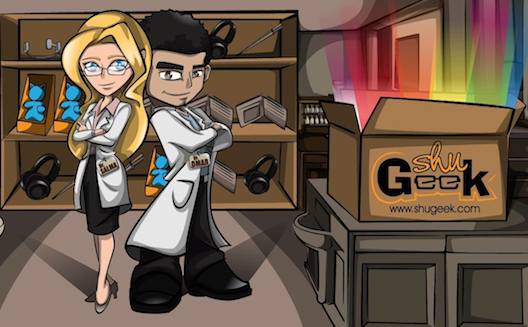 One month was all it took to launch ShuGeek, the website for so-called geeky products in the UAE. The team, adopting a lean startup strategy, launched as soon as the minimal viable product was ready, says founder Moustafa Mahmoud. “We didn’t want to waste time. We launched the website, then tested the users’ reactions, monitored, and made the changes along the way.”

ShuGeek was launched in December 2013 after Mahmoud, the self-styled ‘Executive Ninja’, and his three co-founders recognized the lack of an e-commerce website specialized in geeky products. Mahmoud told us “we didn’t find any geek websites in the region. You can find these products on general e-commerce platforms but not on a specialized one like ours.”

The website offers a wide range of products from various sources such Asia, USA, UAE and Europe. Choosing the products is not a complicated process, according to Mahmoud. “We choose the products that, we, as geeks, want to buy.”

“We offer, for example,” says Mahmoud, “products such as the NFC ring [a smart ring that transmits data and controls apps on your smart phone] or the Iron Man LED ring [a ring based on the Iron Man film that lights up when you clap].”

Products are categorized into different sections: games, luxury products, and office and home. Mahmoud also told us that another section is getting attention: the “Lego-compatible” one. “We offer products similar to the famous Legos but that are much cheaper.”

According to Mahmoud, ShuGeek has succeeded in attracting geeks with relatively low expenses. At the beginning, they bootstrapped the website; they should be able to sustain themselves on this for the next year. “We don’t know what comes next. We don’t want to get external funding unless we absolutely have to,” said Mahmoud.

Mahmoud explained that the technical experience of the team (development, design, payment gateways, etc.) has contributed to limiting expenses. The team also adopted a “smart strategy,” Mahmoud says, for stocking. “We don't stock a lot of products,” he says, “just enough to be able to deliver on time (24 to 48 hours). We also monitor sales trends when deciding which products to buy.”

ShuGeek targets the local market; as Mahmoud says “it’s an experimental adventure and we will see what works or not in the next days or months and adapt accordingly.” While Mahmoud prefers not to disclose any sales or transactions figures, “things are great, even better than our expectations,” he asserts.

Mahmoud explains that the website has relied on SEO since the first day. “My partners are experts in digital marketing. They created several teasers on our YouTube channel.” ShuGeek also used online marketing using their personal mailing lists of friends and fellow geeks.

ShuGeek might be similar to many geek websites, like the famous Thinkgeek (Mahmoud’s source of inspiration), Firebox, and many others. But Mahmoud asserts that his site “is one of a kind in the region.” (The closest competitor I could find is Picky Geeky, which ShuGeek surpasses in terms of design and product variety.)

ShuGeek’s e-commerce platform is just a small part of the founders’ big dreams. Mahmoud considers the site as “fuel for other activities,” like a comic book and the blog (soon to be revamped), as well as e-commerce events, with themes like E-commerce Master Class.

In order to fund all these dreams, Mahmoud wants to expand the product sections within the next six months. If they get enough money, they will try to launch ShuGeek Labs dedicated to geeks’ feedback and reviews on the latest products as well as more free classes and events.

Mahmoud might not be able to achieve all his ideas but he’s confident that perseverance and experience will reveal a bright future.

There is no doubt that by adopting a lean strategy, ShuGeek team is in the midst of a trial-and-error adventure. We won’t know its outcome until the coming months. But based on the team’s collective experience – and the cute website – it seems that they’re doing something right.