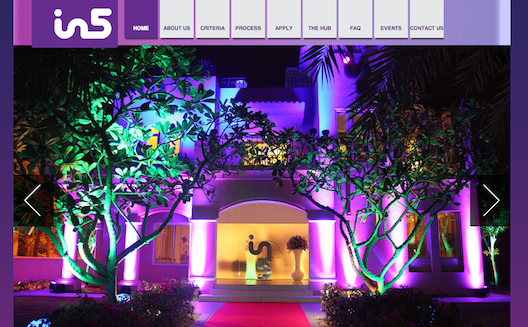 Lately, we often hear startups from Casablanca to Cairo asking us how they can get a foothold in Dubai, the market with the region’s highest smartphone penetration rate and largest e-commerce market.

Not all who have made the leap have succeeded; Bahraini startup Exa.io, for example, explained to Wamda last year why they had to leave Dubai. Yet conditions for expat-led startups like Exa.io are improving, especially at In5, the startup facilitator launched by Dubai Internet City and located in Knowledge Village that is quietly becoming one of the more popular options for getting set up in Dubai (as Wamda contributor Abdullah AlShalabi previously reported).

Offering five primary services – assistance with setup, access to mentorship, training, networking, and access to funding – the center has managed to attract over 48 startups since it launched last May, luring founders from France, Turkey, Lebanon, Syria, the U.S., and even Vietnam. The incubator takes only 10 startups in each cycle, so interested founders must apply to join, but for those who make the cut, its appeal is broad.

“This is the best place to be. In5 doesn’t take any equity, the rent is more than reasonable, and it has more focus and more mentorship [compared to other places],” explains Morrad Irsane, the French founder of Melltoo, a classifieds mobile app that incorporates photo sharing and chat functionalities (“think Dubizzle, with WhatsApp and Instagram built in”).

“When I did my first event here, we had 15-20 people attend,” Irsane continues, as we chat with his wife and co-founder about their mobile app, from one of the purple couches in In5’s downstairs café.

Nidhi Varma, the co-founder of Guiddoo, a mobile application that provides geolocalized information about landmarks, agrees that the incubator’s biggest draw isn’t its gaming lounge, sunny roof deck, or its glass walls; it’s the access to mentorship. “In5 have connected us with Travel Capitalist, a U.S.-based VC company, that has guided us with our strategy,” she and her co-founder husband explain.

Ibrahim Colak of MrUsta and Dirk Stevens of Taskspotting, on the other hand, joined In5 for completely different reasons. Still in the process of getting set up, Colak is seeking investment help from the incubator, while Stevens enjoys the fact that he didn’t have to give up equity in order to register.

For others still, the advantages are more fundamental. Syrian entrepreneur Lojain Jibawi of Votek might have had a difficult time getting set up in Dubai if it hadn’t been for In5, he says. The rest of his staff is in Syria, but he left to expand his company, which creates educational content for children using Arabic speech recognition.

Today, with a community of startups that include ShopGo, the one stop shop for e-commerce solutions, and Reach, an interesting new hardware/software solution for ordering food in restaurants and hotels, the incubator is expanding quickly. In the past ten months, it’s reviewed over 550 applications to accept the 48 startup teams it hosts today and has held 32 networking events, 24 coaching workshops, and 17 mentorship sessions, organized by Rekha Setpal, DIC’s tireless Head of Community Services.

Although In5 is young, it’s an extension of the mandate for Dubai Internet City that Dubai’s leader, HH Sheikh Muhammad Bin Rashid Al Maktoum, announced in 1999, explains Majed AlSuwaidi, DIC’s Managing Director; the incubator is designed to facilitate a knowledge economy.

“We’ve built these building blocks that support the idea of attracting the right talent to come and set up in Dubai,” he explains. “Now, we want to focus on the people, who are [the ecosystem’s] goldmine of ideas. We want to develop this industry so that we have more thinkers and doers on the ground.”

While facilitating a knowledge economy may be a broad mandate, the current goal is to strongly expand Dubai’s pool of entrepreneurs. “We want to help people catapult their business quicker than the lifecycle of normal businesses,” AlSuwaidi says. “Hopefully within the next five years, we will have an active and strong industry that will be serving all sectors with innovative and creative ideas.”

Dubai Internet City isn’t the only entity quietly expanding options for entrepreneurs. Dubai Media City, DIC’s sister entity, which launched in 2001, also under the umbrella of Tecom Investments, is built to support not just multinational media entities but small and medium-sized enterprises, as well as freelance media professionals.

“With the demand that we noticed and the growth that has happened in DMC, we created a category called freelancers,” explains Mohammad Abdullah, the Managing Director of Dubai Media City. “Previously, either [media professionals] would ask to be hired, or they would work illegally. This way, you can have a legal framework [for project-based work],” he says.

The vetting process is designed to approve only those entrepreneurs with a solid business plan and credentials, who can best spur growth in the media sector, says Abdullah. To offer them a base from which to work, DMC provides a business center for freelance professionals and media startups alike, that offers assistance with registration, visas, internet connectivity, and meeting rooms.

Today, it’s having the effect that DMC’s founders had hoped for: luring regional production. “Earlier, a lot of TV shows used to be produced abroad, similar productions are now being produced here in Dubai,” he explains.

As the number of freelancers and entrepreneurs grow over the next few years, facilities like In5 may have to expand; after all, how many more startups can the cozy bungalow fit? Yet, with spots like Impact Hub, MAKE Business Hub, and even The Pavilion re-opening, physical space may be the least of an entrepreneur’s concerns. The upshot for the rising tide of startups expanding to the Gulf is that, with a solid business plan, the process is getting easier.

Disclosure: Wamda's Head of Business Development Roland Daher is a member of the steering committee at in5. ShopGo is a Wamda Capital portfolio company.