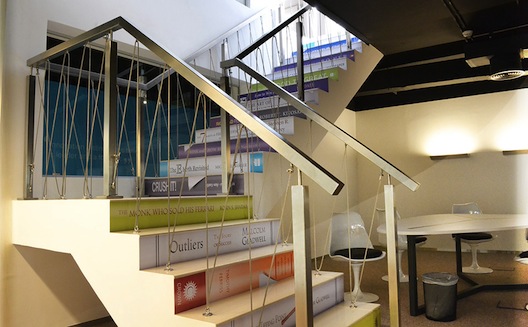 More and more governmental entities, corporations, and individuals believe in the potential of entrepreneurship to improve economies in the Arab world, and open structures to help entrepreneurs turn their projects into full-fledged companies. Among those structures are incubators.

Incubators are organizations whose aim is to accelerate the growth and success of entrepreneurial companies through an array of business support resources and services that could include physical space, capital, coaching, common services, and networking connections, as defined by the International Association of Scientific Parks.

They’re not to be confused with accelerators. As we explained in our list of accelerators in the MENA region, accelerators have the same goal than incubators - accelerate startups’ growth - but have a different format. Accelerators are more intense because there's a concrete time limit (they last around four months), and because they work with classes of startups that begin and end the program at the same time.

Incubators should not be confused either with research and technology parks, which house large-scale projects developed by corporate, government, university labs, or SMEs and do not offer business assistance services.

We’ve selected 15 incubators that are open to startups in the region.

Based: Algiers, Oran, Annaba and Ouargala, Algeria
Launched: 2009, by the ANPT

Model: The ANPT (National Agency for the Promotion and Development of Technological Parks) features offices in Algiers, Oran, Annaba, and Ouargala Technoparks, for a minimum of 24 months, at a monthly rate of 5850 DZD (around $73 USD). Startups that work there receive a large array of services, including coaching, training, press relations management, assistance, and management of patent registration, and industrial and intellectual property protection. Projects holders at the idea stage can benefit from free incubation until their company starts generating revenue. Read our overview of startups in Algeria to learn more.

Model: TIEC Incubation offers entrepreneurs with an ICT-related prototype a one-year incubation program consisting of up to 120,000 EGP (around $16,700 USD) of in-kind services such as consultancy services, software, hardware, and marketing, access to technical, subject-matter advice, business consulting, mentoring, as well as a working space in either Cairo’s Smart Village or in Assiut. Since it is a semi-governmental entity, TIEC does not take any equity in startups and does not charge startups to participate.

Model: AUC Venture Lab offers eight months of incubation to the startups that have graduated from its acceleration program. Startups get access to the same network of investors, trainings, project management, and assistance as before. There’s more information on AUC’s acceleration program in our list of the regional accelerators.

Model: iPARK offers a fully equipped physical space to work from, with 45 independent office units which vary in size from three to eight+ person offices, as well as business services ranging from management team support, development, mentoring, and guidance to marketing and public relations, talent acquisition and recruitment, accounting services, and legal services.

Model: The Berytech team assigns entrepreneurs a mentor to accompany them during their incubation period, follow up on management and budget, and periodically audit their process. Startups have access to either of their three sites in Beirut, with fees starting from $250 USD per month for a desk. Eligible startups can benefit from grants up to $15,000 USD and from up to six months free of hosting/services. They can also apply for VC money through the Berytech fund.

Model: AltCity is a coworking space-turned-café and incubator. Entrepreneurs who work there get access to regular support meetings with the AltCity team, legal assistance, and contacts with banks, lawyers, investors, and potential team members. More services are to come in the future. Entrepreneurs at AltCity can also participate in the many startup-related events organized by the AltCity team.

Based: Ramallah, and Gaza, Palestine
Launched: 2004

Model: The Palestine Information and Communications Technology Incubator (PICTI) has offices in the West Bank and Gaza. In addition to the space and seed funding, PICTI offers full incubation services such as networking, and legal and financial coaching through PICTI business advisors, its Network of Mentors (PNM), as well as international networks such as Mowgli, Youth Employment Network (YEN), and BiD NETWORK. PICTI is a not-for-profit organization with a minimal equity shares recovery model.

Model: This incubator offers a workspace and services, sets up training programs, and organizes events to match experts and investors with technology entrepreneurs. BTI offers its services for free, thanks to partnerships and funding from the World Bank, the UK's Quality Improvement Fund (QIF), BiD Network, and many others. Read our profile.

Model: PalInnO is an organization that aims at creating bridges between Palestine’s most innovative hi-tech entrepreneurs and the global market. They invest in and incubate Palestinians startups, offering office space, as well as professional consulting and mentoring from Silicon Valley experts.

Among their programs is the Palestine to Silicon Valley program (P2SV), which takes startups through three phases: 1) two-month incubation at their space in Palestine; 2) market validation in Europe; and 3) investor pitching in Silicon Valley, as explained in Wamda's profile on PalInnO. The incubator takes shares in the companies it incubates in exchange for seed funding of up to $50,000 USD, office space, mentorship, and IT equipment.

Based: Riyadh, Saudi Arabia
Launched: 2008, by Badir Program for Technology Incubators affiliated to the King Abdul Aziz City for Science and Technology

Model: The Badir incubator offers a place to work to Saudi Arabian technology entrepreneurs at the idea stage, as well as workshops, and various services such as business plans, and legal, administrative, commercial, and marketing assistance.

Model: Akfar.me supports startups that will build products and services tailored to the needs of Intigral’s existing clients. The incubator offers selected startups room in Intigral’s offices in either Dubai or Riyadh for three months, $20,000 USD in seed investment, in exchange for 5% to 20% of ownership in the product, access to their clients in Africa, Asia, and the MENA markets (with a focus on KSA), and mentoring. The incubator has brought on board mentors from MEVP, MBC Ventures, STC Ventures, AstroLabs, Arabnet, Wamda, and more. Read our report.

Model: The private – read: not free – incubator has two main activities: individual coaching to help startups set business plans, raise funds, and develop their businesses, and two training sessions for investors and innovation entrepreneurs, as well as a seminar on alternative funding and a session they market as the Business Angel Academy.

Based: Dubai, UAE
Launched: May 2013, by Dubai Internet City

Model: In5 is an innovation hub hosted by Dubai Internet City (DIC). in5 assists entrepreneurs with establishing their business within the TECOM Freezone, gives them access to a pool of mentors and investors, offers access to seminars and workshops with industry experts and specialists, and gets them in to a range of SME networking events. in5 doesn’t fund startups, but offers discounts on registration, licensing, and visa fees, and offers fancy affordable offices (1,000 AED, or $272 USD, per month) for up to three months. Check out our report on four accelerators in Dubai.

Model: Silicon Oasis Founders works with local entrepreneurs in the technology sector. While any entrepreneur can rent a seat or an office, starting from less than 12,000 AED (around $3,200 USD) per year (including the license), only selected entrepreneurs get access to the services, offered by the incubator, an entity entirely owned by the government of Dubai, in exchange for equity. Among those services are a mentoring program, HR advice, strategy, investment and pitching support, accounting services, company setup and creation, visas, as well as access to a pool of partners.

If you’re only looking for a place to work from with like-minded entrepreneurs, you might also be interested in technoparks or business centers. Casablanca Technopark for instance, is home to many local startups and to major support organizations (Réseau Maroc Entreprendre, CMI, and MNF). In Egypt, you can also rely on Smart Villages’s Smart Zone facilities.

Have you worked at any of those incubators? What was your experience? Have you been to an accelerator that is not listed? Share you experience in the comment section.